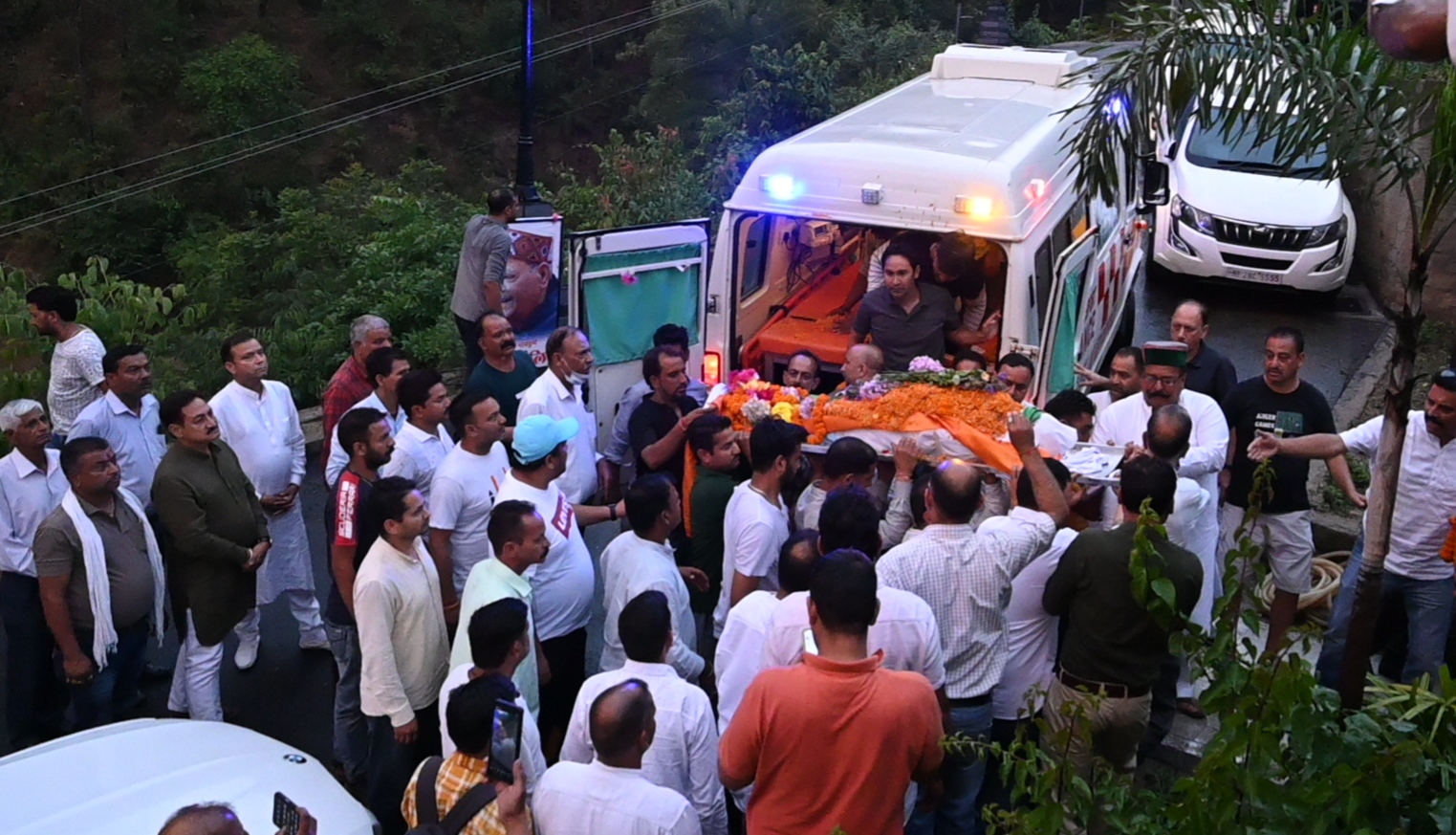 Sukh Ram's body being taken to his home in Mandi on Wednesday.

The body of former Telecom Minister Pandit Sukh Ram reached his native place here this evening. His relatives and acquaintances started gathering at his residence on the outskirts of the town to offer their condolences to the bereaved family. The funeral would be held tomorrow.

The body would be kept at Seri Manch on Thursday morning for people to pay their last respects to the departed soul before being taken for funeral. Chief Minister Jai Ram Thakur and many other senior leaders of the BJP and the Congress are expected to attend the funeral.

Sukh Ram was on the life-support system at AIIMS for the past two days. Ashray Sharma confirmed his grandfather’s death on his Facebook account early this morning: “End of an era. Alvida Dada ji, ab nahi bajegi phone ki ghanti (Good-bye Dada ji, now, the bell of your phone will not ring)”.

Sukh Ram was born at Kotli village in Mandi district on July 27, 1927. In 1962, he became a member of the Territorial Council of Himachal Pradesh. He served as the Union Minister for Communications and Information Technology from 1993 to 1996.

Sukh Ram represented the Mandi Assembly seat from 1962 to 1984. He was elected to the Lok Sabha in 1984 and served as a junior minister in the Rajiv Gandhi government. He had also served as the Minister of State for Defence Production and Supplies, Planning and Food and Civil Supplies.

He won the Mandi Lok Sabha seat in 1996, but was expelled from the Congress along with his son Anil Sharma after the telecom scam. In 1998, he formed the Himachal Vikas Congress (HVC) and entered into a post-poll alliance with the BJP and joined the government.

Sukh Ram contested the Assembly elections from Mandi Sadar in 1998 and won by a huge margin of votes. In the 2003 Assembly elections, he retained the Mandi seat but re-joined the Congress in the run-up to the 2004 Lok Sabha elections.

In 2017, just before the state Assembly elections, Sukh Ram, along with his son Anil Sharma, joined the BJP and campaigned for it extensively in Mandi district; the BJP won nine out of 10 seats. However, in 2019, just before the Lok Sabha elections, Sukh Ram left the BJP and re-joined the Congress to get the party ticket for his grandson Ashray Sharma from the Mandi Lok Sabha seat. The BJP had refused ticket to Ashray, who lost the election.

Body to be kept at Seri Manch