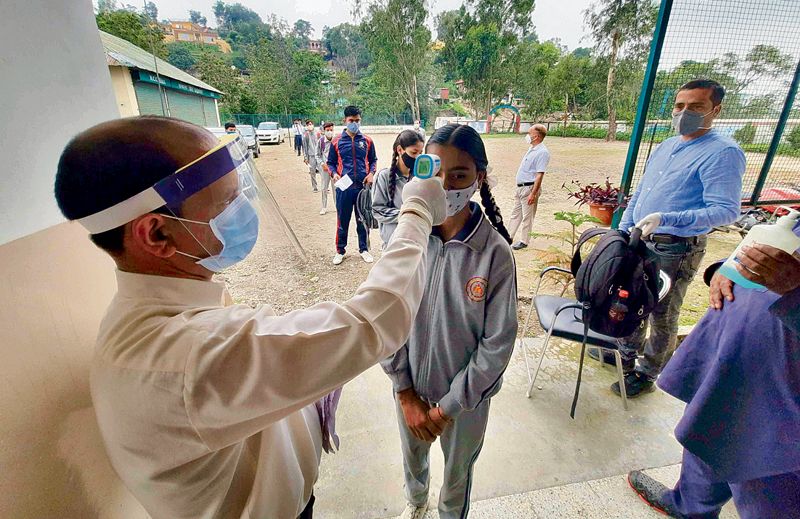 A student being screened at Government School in Solan.

The state on Sunday reported its first case of Omicron, a 45-year-old woman from Mandi district. She, however, tested negative on Saturday.

Confirming the development, National Health Mission (NHM) Director Hemraj Bairwa said: “The first Omicron patient is a 45-year-old woman from Mandi district. She’s fully vaccinated but has a travel history to Canada. She arrived in Shimla on December 3. Her RT-PCR test was done on the eighth day on December 11 and the sample was sent for whole genome sequencing to Delhi. A positive report was received from the laboratory on Sunday.”

“However, her RT-PCR test was done again on December 24 and she tested negative for Omicron,” he added.

In a press statement, a government spokesperson said: “As many as 2,167 foreign passengers have arrived in the state as per the list shared by the Centre from November 20 to till now. Of these, 1,747 passengers were eligible for the RT-PCR testing…”

“So far, the RT-PCR tests of 942 persons have been conducted and 10 samples have been found positive. Of these, seven samples were sent for whole genome sequencing to Delhi and one tested positive of Omicron. The rest of the three samples are in the process of being sent to the Delhi,” he added.

“Meanwhile, three primary contacts of the patients have been traced so far and they have tested negative. All of them are fully vaccinated,” the spokesperson added.