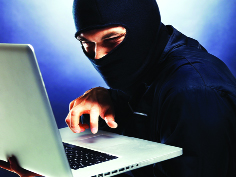 The police arrested the mastermind of many cases of cyber fraud in Manali yesterday. Kullu SP Gaurav Singh said Sourav Mitra (30), a resident of Nadia district in West Bengal, was arrested for a cyber crime of bulk message fraud and a case was registered against him at Manali police station.

The SP said that a delivery boy of Amazon had filed a police complaint that Mitra came to their Manali office and told him that he had ordered a laptop online with the option of cash on delivery. He expressed desire to transfer Rs 30,000 through net banking as he did not have cash. The delivery boy gave him the details of his own bank account number as at that time no bank account number of the company was available. Later, the delivery boy received a message on his cellphone that Rs 30,000 had been transferred to his bank account.

The SP said the delivery boy gave Mitra the laptop but later in the evening he discovered that he did not receive the money in his bank account. He visited the bank and found that no money had been transferred. He tried to call the accused who had blocked his phone number. He then realised that he had been cheated.

Gaurav said that the cyber police found that the message that was sent to the delivery boy was fake. He added that the police apprehended the accused in Manali, who told his name as Arvind and also presented an Aadhaar card. Upon a thorough search of his house in Manali, his real credentials were discovered, the SP added.

The SP said that during interrogation, Sourav disclosed that he had duped a boy of Rs 8 lakh in Bihar and another person in Gaya. He had cheated many persons in Shimla and Kinnaur by falsely presenting himself as an employee of Discovery TV channel.

He urged people to inform the police immediately about such frauds on mobile phone number 8219681731.