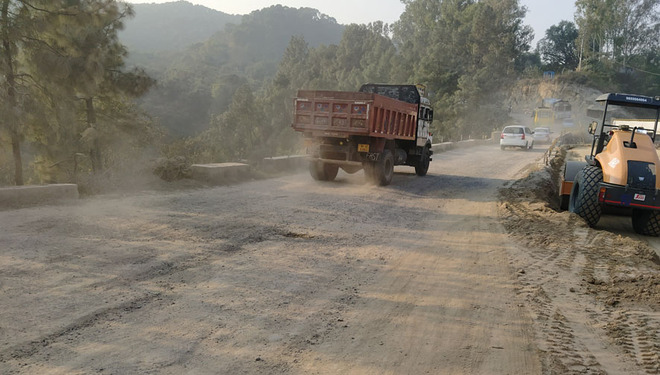 The broken road between Nadaun and Ghagas. Tribune photo

There is no respite for people commuting between Ghagas and Hamirpur due to the delay in the Rs 289-crore Matour-Shimla National Highway widening project that was started around four years ago.

The Matour-Shimla highway is the life line of the state but the delay in the project has caused immense inconvenience to commuters. The construction of three major bridges (Kunah Khud, Dhadhol and Awari bridge near Kandrour) and their abutments is going on at a snail’s pace and the National Highways division of the state Public Works Department (PWD) has turned a blind eye towards public plight.

The delay in the construction of the bridges has made several stretches on the highway accident prone in the last over one year. The old national highway at the Kunah Khud has also been neglected and even after a number of accidents and daily traffic snarls, the PWD National Highway authorities have done precious little till now.

The highway leads to Shimla and all traffic from places such as Kangra, Chamba, Pathankot and Hamirpur passes through this stretch. The maintenance of the old highway was the responsibility of the National Highways division while the construction company was to maintain the diversions. But neither the construction company nor the National Highways division gave attention to the problems of the people.

Similarly, the Nadaun to Cheel Bahal stretch of the highway is badly damaged and full of potholes. This road was under the jurisdiction of the National Highways Authority of India (NHAI) as part of the proposed Shimla-Matour highway four-lane project. It was neglected due to uncertainty over its continuation. The NHAI has stopped all maintenance works following a notification issued by the Union Ministry of Roads and Transport.

Yogender Raut, Project Director of NHAI, said that the government had issued directions to start the work on the highway. He added that 65 per cent work of land acquisition for the fifth phase of the project had been completed.