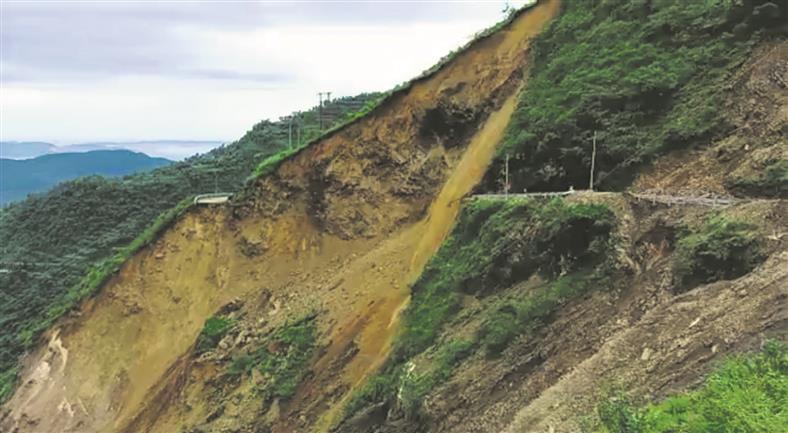 Limestone quarrying, which was underway at the toe of the slope at Kali Dhank till 2019, triggered the July 30 cave-in of 150-m stretch of the Paonta Sahib-Shillai road (NH-707)

Limestone quarrying, which was underway at the toe of the slope at Kali Dhank till 2019, triggered the July 30 cave-in of 150-m stretch of the Paonta Sahib-Shillai road (NH-707), reveals a preliminary study by the Geological Survey of India (GSI).

A three-member GSI team, which visited the site on August 3-4, submitted its report to the district administration on Sunday.

It states, “The slope was weakened due to mining near its toe. Recent heavy rains triggered the incident.”

Sounding a word of caution, the study suggests that the new road alignment must avoid a distress rock mass stretch found at the downstream shoulder of landslide near the road level. A minor slope failure has been recorded at its toe.

Though Barwas village, located further uphill area of the affected site, appears to be on stable ground,

the uphill mass, including village establishments, must be frequently observed for any ground signatures of slope instability, the report suggests.

Vivek Mahajan, Sub Divisional Magistrate, Paonta Sahib, said, “Several measures have been suggested by the GSI team to stabilise the slope, both while restoring the road and undertaking its widening. The company concerned has been directed to adhere to the suggestions.”