At present, crash barriers are installed only on 429 km of 39,500 km roads in state | Crash barriers help in absorbing impact, reducing severity of accident 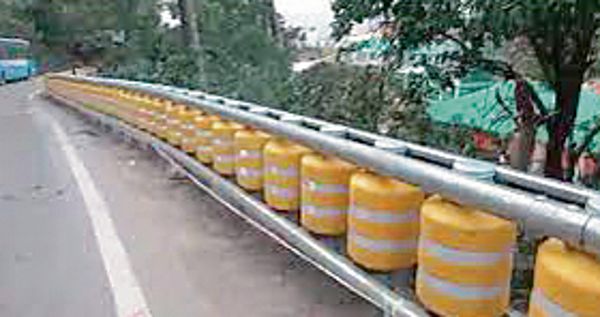 The Engineer-in-Chief has issued directions to the PWD employees to make provision for crash barriers during preparation of detailed project report (DPR) for construction of new roads.

The process of allotting tenders for installation of crash barriers on accident-prone stretches measuring 17-18 km of road under the road safety plan has begun.

At present, crash barriers are installed only on 429 km of the 39,500 km roads in the state. The crash barriers help in absorbing the impact, reducing the severity of the accident. These work well with small and medium-sized vehicles, but these are not 100 per cent successful in holding heavily loaded trucks and very high speed vehicles in hilly areas, leading to roll-down accidents.

Roller crash barriers, which have been installed at few places on national highways, are well suited for hilly terrain as the vehicle slides along the barrier. But these are very expensive ranging between Rs 70,000-Rs 80,000 per metre.

Thrie beam and W beam crash barriers are being installed on national and state highways, respectively, in the state which cost from Rs 2,600 to Rs 10,000 per metre as per the specifications of the Ministry of Road Transport and Highways, said Engineer-in-Chief, PWD, Ajay Gupta.

Thrie-beam crash barriers are quite similar in design, but are costlier and less prone to damage by vehicle collisions. The arms are installed 850 mm above the ground and 1,150 mm under the ground. W beams, posts and spacers should be hot dipped galvanised.

As per the specifications, the crash barriers should be installed at locations of repeated fatal accidents, sites where the sight distance is less than 60m and radius of curve is less than 100m, besides places where crossroads are joining a national highway at acute angles.