Narrow escape for occupants as car gets buried under pick-up after speeding tanker rams into 4 vehicles on Chandigarh-Shimla highway : The Tribune India 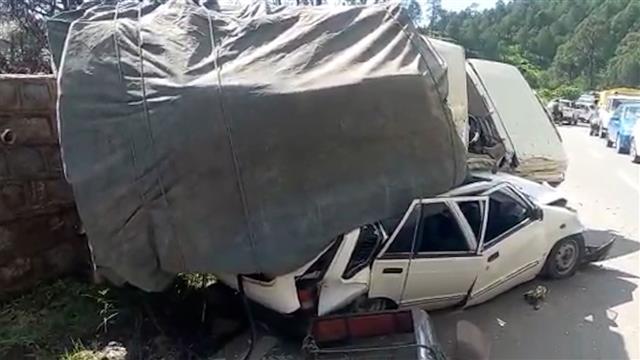 A tanker on its way from Chandigarh towards Solan rammed into four vehicles near Shamlech on the Kalka-Shimla highway early Wednesday morning.

Two people, including a woman and a youth, were injured in the accident.

They were occupant of a Maruti car and an i-10.

The speeding tanker driver first hit a pickup coming from the opposite direction. Such was the impact of the mishap that the pickup hit a roadside crash barrier before falling on a Maruti car coming from behind. The truck driver then hit another vehicle. As repair work is underway on the Barog tunnel, there is heavy traffic movement on the old route. The injured were rushed to a nearby hospital.

The accident caused a long-traffic jam on the Kalka-Shimla national highway. An onlooker said the driver and conductor fled the scene after the accident.