According to State Project Implementing Unit, total of 1,33,056 farmers are practicing natural farming in the state, either partially or fully, including 12,000 apple orchardists 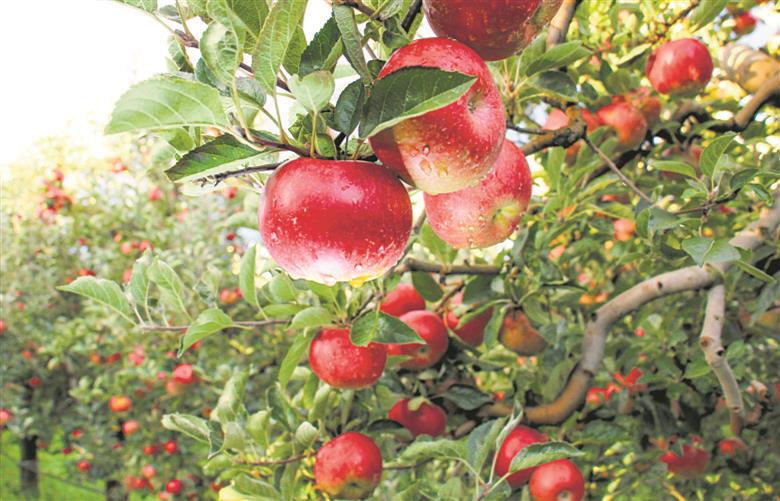 Apple grower Shakuntala Sharma in upper Shimla in Himachal Pradesh has reasons to smile. The apples she produced under natural conditions without the use of chemicals and fertilisers have fetched a record price of over Rs 100 per kg.

"The moment a buyer in the local market saw the label of natural apples on my boxes, he instantly said he would purchase the entire stock at this price. By adapting to natural farming, I saved Rs 50,000-60,000 on the total cost of cultivation," an elated Shakuntala said.

Shakuntala’s orchard is located in Theog area, some 40 km from here. She is growing apples by adopting the Subhash Palekar Natural Farming (SPNF), a technique to do cultivation through non-chemical use, and this concept is gaining ground in the hill state where producers are particularly vulnerable to impacts of the climate crisis, such as extreme heat, deficit precipitation and pest attacks.

According to Shakuntala, vegetable buyers have started coming to her farm and giving her good prices.

But the agricultural alchemy of the heavy use of chemical fertilisers and pesticides comes with a toll in degrading the soil of orchards and damaging the ecosystem.

Countering the farming's growing problems, the SPNF method is based on homemade inputs made from 'desi' cow's dung and urine and locally available resources.

Narrating his story about how overuse of fertiliser was impacting his income, another grower Ravinder Chauhan from Samoli panchayat in Rohru block, said he was in financial stress as he faced multiple problems in apple orchard due to ever increasing expenditure on chemical sprays.

"The shift to natural farming has helped me earn good profits in the last three years," he said.

Chauhan, who cultivates eight bighas (a bigha is roughly a fourth of an acre) with natural farming, has sold an apple box of 25 kg for Rs 4,200-4500 in far-off states like Tamil Nadu, Gujarat and Karnataka.

He said the fluctuation of prices in the normal market did not affect him as his apples were chemical free. "I fixed the rate in advance," he added.

The non-chemical low-cost climate-resilient SPNF technique is being promoted for agriculture and horticulture crops in the state as a part of Prakritik Kheti Khushhal Kisan Yojana, launched by the state government in 2018.

According to the State Project Implementing Unit, a total of 1,33,056 farmers are practicing natural farming in the state, either partially or fully, involving 7,609 hectare. This includes 12,000 apple orchardists.

While the farmers are happy with the results of natural farming in terms of zero dependence on external markets, production, farm health and reduced expenditure, they have started making efforts to build their own linkages for marketing of their produce.

Some of them are getting good rates in local markets, others are sending them across the country and many have started getting buyers at doorsteps.

One such grower is Surender Mehta from the Lalpani Dochi village in Chopal block who found buyers in Jaipur and Delhi.

"This year, a Jaipur-based agro trading company lifted apple boxes from my village. They paid me 10-15 per cent more than the normal price of apples produced with chemical fertilizers and pesticides. It saved my hassle and money involved in transporting the produce," he said.

"I felt so good when I was offered Rs 150 more for a box of 10 kg pears even in a local market when I told the buyer that my produce is chemical-free and natural," he added.

Another progressive grower Varun Rangta from Jubbal sold the entire apple lot of around 200 boxes produced by natural farming techniques in Delhi, Chennai, Nagpur and Pune.

Sushma Chauhan, a grower from Shillaru, says awareness on the chemical-free natural produce is increasing. Even her hail damaged apples found the market.

Prakritik Kheti Khushhal Kisan Yojana Executive Director Rajeshwar Singh Chandel said, "The State Project Implementing Unit is looking for farmers for local-based marketing models, which they have evolved on their own. This will help us converge the successful farmer-market linkages with our programme, wherein we are looking at connecting all farmers with the market."   He said the farmers have not only shown their mettle on farm with SPNF, but have successfully made market linkages also.

Scientific studies in the state show the SPNF technology has reduced the cost of cultivation in apple crop by 56.5 per cent, while the net returns in apple crop have increased by 27.4 per cent.

The incidence of scab and marssonina blotch in apples is also less in natural farming compared to the conventional practices. More so, the farmers are able to take multiple crops on the same farm by adopting SPNF.

More than 90 per cent of Himachal Pradesh's apple produce goes to the domestic market. Apples constitute 49 per cent of the total area under fruit crops and 85 per cent of the state's fruit economy comes to Rs 4,000 crore.