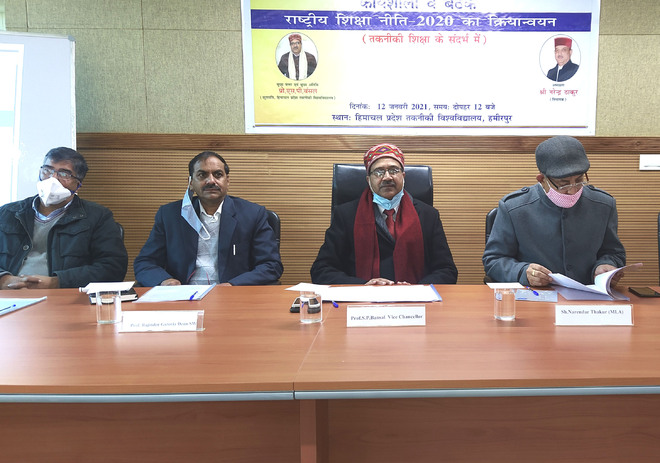 A seminar underway on the New Education Policy at the HPTU.

The New Education Policy (NEP) will stop brain drain from the country and pave the way to achieve the goal of becoming ‘Vishav guru’ as envisaged by Prime Minister Narendra Modi.

Prof SP Bansal, Vice-Chancellor, Himachal Pradesh Technical University (HPTU), said this while addressing educationists gathered here for initiating the execution of the New Education Policy in affiliated colleges of the HPTU. He said it was unfortunate that the country failed to preserve its intellect and the best brains had migrated. Quoting the example of NASA, he said more than 60 per cent scientists in NASA are from India.

He said if executed in its true spirit, the policy would not only help in the overall development of students but also inculcate holistic values like Nalanda University had centuries ago. He said the HPTU would focus to develop 100 per cent vocational curriculum for its colleges so that students passing out from the university should get the best placements.

He said the HPTU was poised to improve student intake to make colleges self-reliant and to enable them in developing as autonomous colleges in future. He said such multi-disciplinary colleges would be able to design their own courses and give degrees to students. He said the policy also stressed on creation of multi-disciplinary education and research universities for developing a versatile education system in the country.

Narender Thakur, MLA, said the policies of the PM had attracted attention of the world towards India. He said professionals from all spheres, including education, investment, commerce and defence, were looking towards India and its growth.