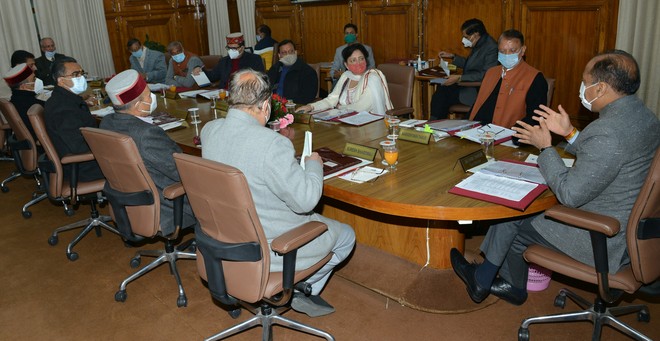 The Cabinet today decided to continue night curfew in four districts of Shimla, Mandi, Kullu and Kangra and all other restrictions on all social gatherings all over the state till January 5, 2021 keeping in view the coronavirus situation.

The Cabinet, which met here today under the chairmanship of Chief Minister Jai Ram Thakur, decided to continue with the existing SOPs, including five-day week in government offices till January 5 in view of the surge in Covid cases. The only relaxation given is in case of political functions, including inauguration and laying of foundation stones, with a limit of 50 persons with social distancing.

The Cabinet had imposed night curfew in the four districts of Shimla, Kullu, Kangra and Mandi till December 15 in view of rising Covid cases. All other restrictions, including the limit of 50 persons on social, religious and cultural gatherings, will continue till January 5.

The Cabinet also decided to hold panchayati raj elections as per the dates fixed by the State Election Commission, which are scheduled to be held anytime now. “We have conveyed to the commission that the government is ready to hold the elections as per the dates conveyed to us,” said Urban Development Minister Suresh Bhardwaj. He confirmed that the three-year celebration of the government will be held through a virtual function in view of the Covid situation.

Bhardwaj also confirmed that certain rural areas in districts of Solan and Chamba where there were no disputes had been excluded from the purview of the Town and Country Planning Act. He said the interim report of the Cabinet sub-committee constituted for the exclusion of purely rural areas from the purview of the TCP Act had submitted its report to the Cabinet. He said the decision with regard to the exclusion of other areas in Shimal, Kangra, Una, Hamirpur Sirmaur and other districts would be taken after deliberations.

The Cabinet gave consent to shift the office of Deputy Inspector General (Intelligence and Security) from Shimla to Dharamsala in public interest. The Cabinet also gave its consent to create Pain and Palliative Care Cell under Radiotherapy Department in Indira Gandhi Medical College, Shimla for providing better health facilities to the people. Presentations were made by Tourism and Horticulture departments before the Cabinet on its targets for the next six and 12 months.