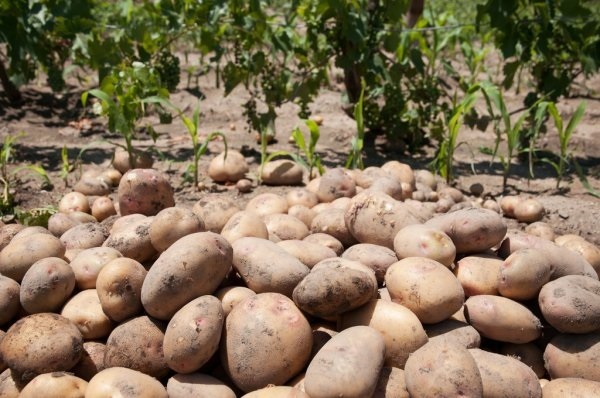 Potatoes left by farmers in a field in the absence of buyers.

Potato growers in Palampur, Nagrota Bagwan and Kangra are finding no buyers this year. Upset at the drastic fall in the selling rates of their produce, marginal farmers with small landholdings are forced to sell the harvested potato crop at throwaway prices to wholesalers. Potato is a major cash crop of the Kangra valley.

Sulaha, Mehanja, Bhawarna, Nagrota Bagwan, Dheera and Baijnath areas of Kangra district are known for quality potato production. Potatoes grown here are mostly used to make chips by various multinational companies. This year, because of Covid-19 crisis, lockdown has been imposed in most of the states in northern India, and there are hardly any buyers for potatoes in the district.

The Tribune team today visited various potato growing areas around Palampur, where farmers are worried over poor demand for their produce in the market. Talking to The Tribune, farmers said the input cost of growing potatoes had increased manifold in the past few years. Prices of fertilisers had almost doubled in the past two years. They said this year they had purchased the potato seed at a high rate of Rs 51 per kg this year. However, the distressed sale of their produce, has become a matter of concern for them. Farmers have piled up tonnes potato stokes in their fields and homes, waiting for the customers to come once the lockdown is relaxed and markets in Punjab, Delhi Haryana Uttar Pradesh are opened.

Romesh Kumar, Mehar Chand, Vijay Kumar, Subhash Chand and Neeraj Kumar said earlier, the traders used to come regularly to their villages during harvesting to settle the buying price and they were getting a higher rate than the MSP. However, this year, not even a single trader had turned up to buy their produce, the said. They are being offered Rs 90 per quintal by a few wholesalers, that is just half the amount of their production cost. In the present scenario, they would be forced to abandon the cultivation of potatoes, they said.

Potato growers demanded that the state government should come for their rescue and fix a minimum price of Rs 20 per kg. They said if the lockdown in the country was not relaxed or the markets were not opened, their produce would rot.

Experts of the HP Agriculture University said farmers should avoid cultivation of potato regularly. The farmers, who had been cultivating potato every year, should go for alternative crops.