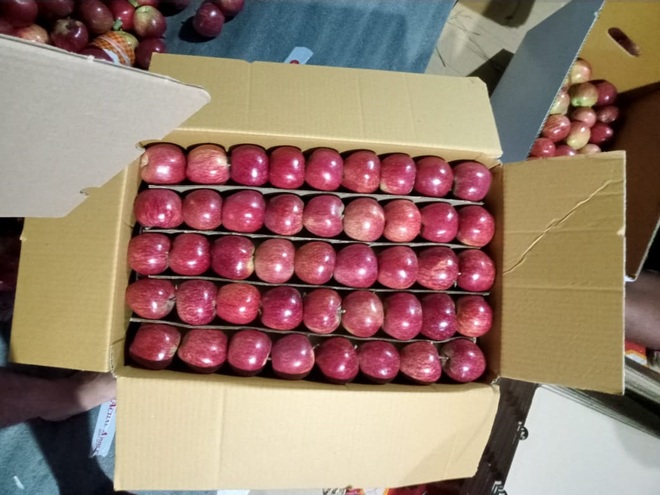 The rates of Rs 12 to Rs 72 per kg for various varieties of apples offered by Adani Agrifresh Limited. File photo

The rates of Rs 12 to Rs 72 per kg for various varieties of apples offered by Adani Agrifresh Limited at its three collection centres in Shimla district have forced growers to turn to the Agriculture Produce Marketing Committees (APMCs) at Solan and Parwanoo to sell their produce.

Enquires from the APMCs at Solan and Parwanoo have revealed that various varieties of apples are selling at rates from Rs 400 to Rs 2,000 per box.

Ravinder Sharma, secretary of the Solan APMC, says that apples are selling at rates between Rs 400 and Rs 2,000 per box and the sale of 13 lakh boxes for more than Rs 200 crore has been recorded till now.

About 25 kg to 33 kg of apples are packed in boxes of various sizes. The growers have managed to sell the fruit for Rs 90 to Rs 125 per kg through the APMCs and at markets in Delhi and other places in the region, say growers in Shimla.

The size and colour of apples play the key role in deciding their rates and the undersized fruit of all colours is selling at the lowest price of Rs 12 per kg, as per the rate list declared by Adani Agrifresh Ltd for August 26 to 29 for Shimla district. It has three collection centres at Rewali, Sainj and Rohru in Shimla district, says Govind, a grower at Kotkhai, who has come to Solan to sell his produce.

All types of apple having less than 60 per cent colour are being bought at Rs 15 per kg while undersized apples are fetching Rs 12 per kg.

The growers say that it is unfair on the part of Adani Agrifresh Ltd to fix the price of even the most premium variety at mere Rs 72 per kg, as these apples after packed and sold by them are selling for more than Rs 250 per kg. “It is unfair to exploit the growers by fixing such low rates and categorising the fruit to offer lower rates,” they add.

A grower also has to spend money on packaging and transportation of the produce to the collection centres and such low rates will cause him losses. “We have put the plucking of the fruit on hold till the rates improve, as the prevailing trend will not benefit the growers,” adds another grower at Kotkhai.