Hardeep Singh, a sanitation worker, first in the state to be administered a shot 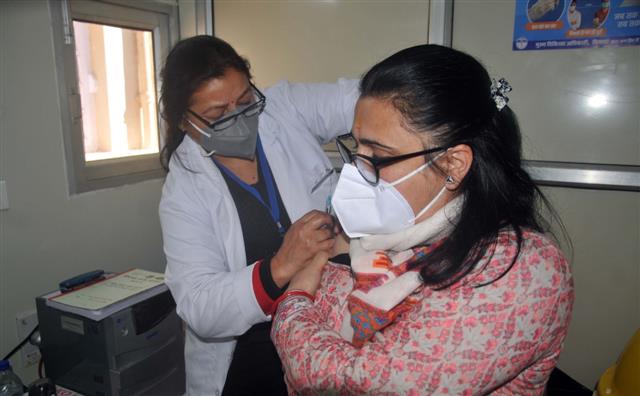 Covid vaccine being administered to a health worker at IGMC Hospital in Shimla on Saturday. Tribune photo: Amit Kanwar

Hardeep Singh, a sanitation worker, was the first person in the state to be administered a shot.

After him, IGMC senior medical superintendent Janak Raj got vaccinated.

A total of 1,536 healthcare workers were vaccinated on Saturday for COVID-19 in the state, special secretary health Nipun Jindal said.

The symptoms were dizziness, anxiety, nausea and shivering and the beneficiaries recovered after management as per protocol, he added.

The second dose of the vaccine would be administered to them after 28 days, Jindal added.

A consignment of 93,000 doses of COVID-19 vaccine had reached the state capital on Thursday.

The consignment of Covishield vaccine, produced by Pune-based Serum Institute of India, had been airlifted from Pune to Chandigarh, from where it was brought to Shimla by road.

Subsequently, doses were sent to other districts and areas for administering it to healthcare workers, according to officials.

He said that Adverse Events Following Immunisation (AEFI) management training had been given to the session site vaccinators for establishing referral mechanism and report on CoWin App.

Thakur said that AEFI Committees at state and district level had also been notified with additional members of Pulmonologist and Medicine Specialists for casualty assessment of AEFI cases.