Over 400 kg drugs seized from Kullu 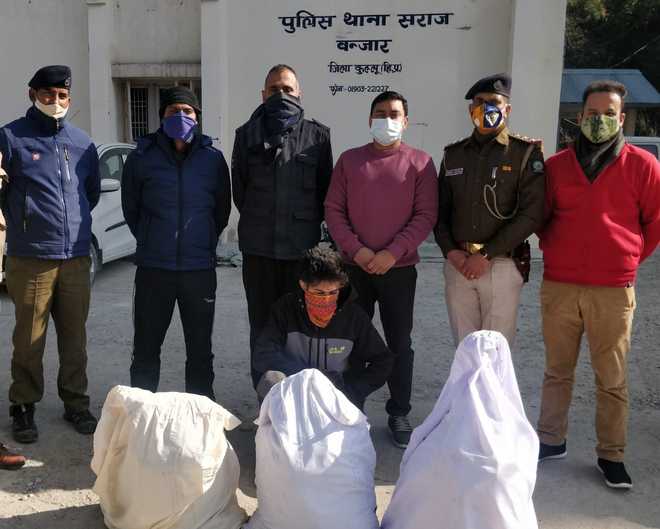 A drug peddler in police custody at Banjar in Kullu on Thursday.

The police seized over 400 kg of drugs — over 122.5 kg of charas, a form of cannabis, and 295 kg of ganja (marijuana) — from Banjar in Kullu district in the past 24 hours. The seizure is worth over Rs 4 crore in the international market.

Kullu SP Gaurav Singh said on the basis of intelligence reports and field inputs that big drug mafias had been active in Banjar since long, a 27-member joint team of the Kullu police, including personnel from the Special Investigation Unit and Banjar police station, was deployed in Shrikot panchayat.

The team arrested a supplier and a delivery facilitator, who were carrying 111 kg charas in three sacks, from a forest in the wee hours today.

He said the estimated price of the seized contraband was about Rs 3.35 crore. He said they used to stock and produce charas on the demand of dealers and were on the police radar.

The SP said the police team raided the house of another suspect in Gharatgad of Banjar area and seized 11.588 kg of charas along with two unlicensed guns. The team also seized 295.2 kg of ganja from the house of one more suspect at Sajahu village. He said four persons had been arrested in three cases.

The SP said in another incident in Anni, 4.505 kg charas was seized from Hari Chand (55). He said the Kullu police had seized more than 412 kg of charas in the last one-and-a-half years and registered 68 NDPS cases.

The SP said the operation lasted for about 20 hours.

DGP Sanjay Kundu said the police were targeting big fishes in the drug and narcotics trade. The police had stepped up its anti-narcotics drive this year. He said financial investigation was under way so that properties of the key accused could be got attached.