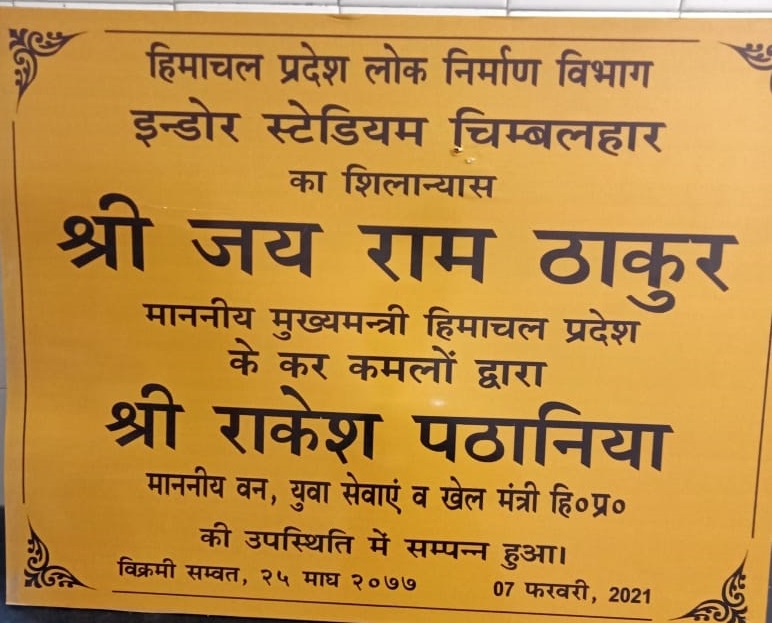 The stone laid for the indoor stadium in Palampur. Photo by writer

The construction of a multi-storey indoor stadium in Palampur has been hanging fire for the past two years because of official bottlenecks.

Chief Minister Jai Ram Thakur had laid the foundation stone of the project in February 2021 but not even a single brick was laid. Information gathered by The Tribune revealed that the Chief Minister, during a visit to the town in 2020, had sanctioned an indoor stadium for Palampur on 10-kanal land at Chimbalhar on the outskirts of the town.

Later in February 2021, the Chief Minister also laid the foundation stone for the project and a token budget of Rs 30 lakh was also released. The cost of the project had been estimated at Rs 10 crore.

In the past one year, despite the repeated requests, neither additional funds were released by the government, nor the administrative approval was granted for starting the construction of the project. Despite regular correspondence made by the local PWD divison with the government, no headway was made in the project.

Later, Rs 30 lakh, the amount released for the project, was withdrawn by the Sport and Youth Welfare Department and diverted it to some other project.

A senior officer of the PWD said it had completed all formalities and land was also transferred in the name of the Youth and Sports Department, an agency which was to execute the project. Since there was no administrative approval for the project, it was not possible to take up the construction.

Palampur MLA Ashish Butail said the project was announced by the CM and he should have fulfilled his commitment made to the residents of Palampur. But it was shocking that no officer was ready to implement the announcements made by the Chief Minister.

He said the foundation stone was also laid but later no funds were released because Palampur was being represented by Congress MLA. The government was extending the step-motherly treatment to Palampur. The CM office must enquire why the construction of the project was not made despite the fact that it was announced by the CM.