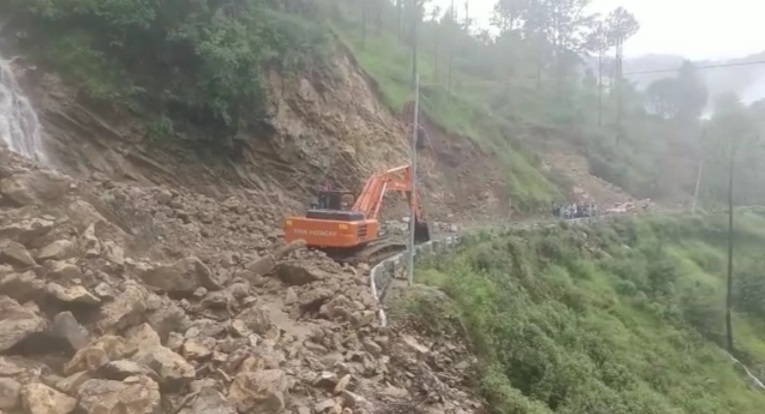 Many roads were closed in Sirmaur owing to incessant rain which lashed the district in the last 24 hours.

A maximum of 18 link roads were closed in Shillai which was the worst hit while one in Nahan and 12 in Sangrah were also blocked.

DC Sirmaur RK Gautam said that work was underway to restore the link roads. He warned the people using the NH-707 to be careful as boulders and debris were falling at various places owing to the rain.

A private car (HP-01N-0268) of Rajinder Singh of Koti Uttrow village was washed away at Kyari nallah in gram panchayat Kyari Gundah. No loss of life was, however, reported.

One shop at Timbi market was inundated with rainwater, resulting in damages.

Landslide occurred in front of a house at Kuhant gram panchayat in Shillai. The field staff of the revenue department has been directed to visit the spot and report the losses. Loss was caused to the crops of villagers of Lohran in Uttri .

Protection wall of Government Senior Secondary School at Kota Pab was damaged due to the incessant rain last night. Two vehicles were buried in Shillai though no loss of life was reported, informed the DC.

As many as 165 power transformers were damaged in areas like Shillai and Rajgarh sub-divisions owing to incessant rains in the last 24 hours. The power was, however, restored, informed Superintending Engineer, HP State Electricity Board Limited, Darshan Saini.

As many as 165 power transformers were damaged in areas like Shillai and Rajgarh sub-divisions owing to incessant rains in the last 24 hours. The power was, however, restored.