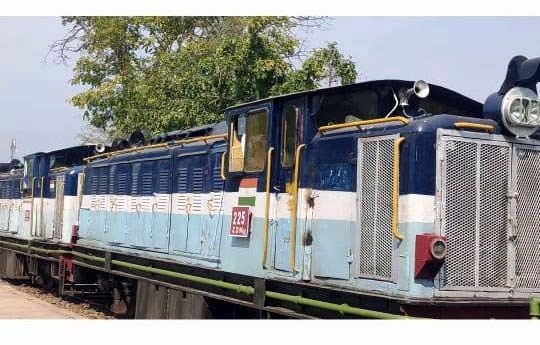 A train arrives at Nagrota Surian on Monday. Tribune photo

Train service on the Pathankot-Jogindernagar narrow gauge railway line, which remained suspended for 11 months during the Covid imposed lockdown, resumed on Monday.

The Northern Railway started the first passenger train on this route, cheering the commuters for whom it was the only mode of public transport in lower Kangra district.

The Railway authorities have also increased the fare with two minimum and maximum fare slabs. The commuters have to either pay a minimum of Rs 30 or a maximum Rs 50 fare for their journey from Pathankot to Jogindernagar for their respective destinations. The sudden hike in fare though dismayed the commuters who used to prefer this economical transport service.

The commuters today paid Rs 30 for their travel from Nagrota Surian to Guler whereas the bus fare for the same is Rs 25. Similarly, for the journey from Jawali to Nagrota Surian they paid Rs 30, whereas earlier they had to pay only Rs 10.

Some of the passengers, Anil, Sujan, Pooja, Ram Kumar, Sunil, Asha Rani and Subhash, who travelled in the train today have urged the Railway authorities to rationalise the train fare keeping in view the distance mileage so that needy people could take benefit of the service.

Only a single train service from Pathankot to Jogindernagar started today. As per official information, another train service would start from Tuesday. The Railway department will resume at least three to four trains on the route, whereas the commuters pleaded to restore all seven trains which were plying between Pathankot and Jogindernagar before the lockdown.