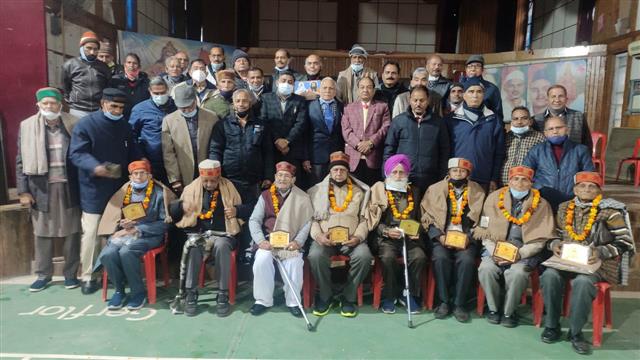 Octogenarian pensioners being honoured at the Samman Samahro organised by the HP State Pensioners' Association at the Bachat Bhawan in Nurpur on Saturday. Tribune photo

The HP State Pensioners’ Association honoured eight octogenarian pensioners of the area during its annual function at the Bachat Bhawan here on Saturday. The association, founded in 1995, is organising the Samman Samahro for the past many years to honour aged pensioners hailing from lower Kangra areas.

Anil Bhardwaj, Nurpur SDM, who presided over the function, felicitated eight pensioners. They were presented with shawls, caps and mementos.

He highlighted the longstanding demands of the pensioners, including conversion of pension allowance of 5, 10 and 15 per cent, respectively, after reaching the age of 65, 70 and 75 years, into pension increment and the enhancement of monthly medical allowance from Rs 400 to Rs 2,000 per month. He also appealed to the state government to seek medical allowance options from pensioners and issue a notification of the amended rules so that pensioners could get the benefit of the implementation of the recommendations of the Sixth Pay Commission.