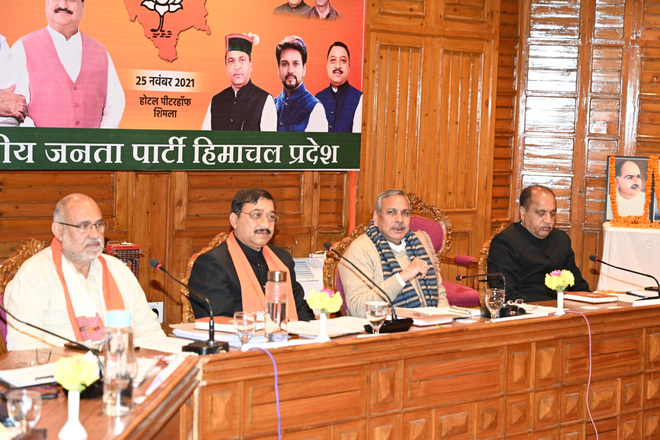 In action mode with view of defeat in four by-elections, the extended core group of Himachal BJP today reviewed the performance of ministers in-charge of districts and heads of various morchas and deliberated on Shimla Municipal Corporation polls slated for June 2022 and the Assembly elections in October ot November next year.

The BJP had appointed ministers as in-charge of distrists besides, state office-bearers for better coordination between the party and the government but it did not work in the byelections, prompting itto make leaders accountable.

An ‘eye opener’ for party: Khanna

The BJP had captured Shimla Municipal Corporation for the first time in 31 years in 2017 and retaining hold over the prestigious civic body is crucial for the party as it would be followed by Assembly polls just after four months.

The meeting not only discussed the reasons of the defeat but also deliberated on “what role was played by whom” in the elections, indicating that some harsh action could be taken against the leaders who directly or indirectly harmed the party or remained dormant.

The meeting of state office-bearers is in progress. Party national Vice-President Saudan Singh is also attending the meeting.

The extended core group meeting focused on shortcomings and deficiencies that led to defeat.