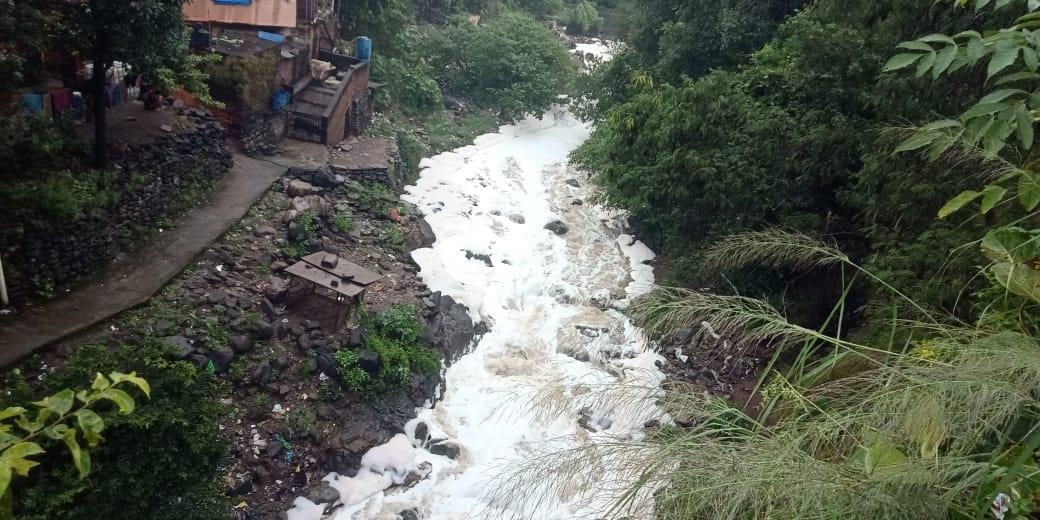 Toxic froth covers the surface of Shivloti nullah in Parwanoo as untreated effluents are dumped into it .

Taking stern view of the water pollution caused by letting out of untreated toxic effluents into open, a committee headed by SDM Kasauli today sealed the erring pharmaceutical unit at Sector-5 in Parwanoo.

An environmental compensation of Rs 88,500 has been imposed for violating the provisions of the (Prevention & Control of Pollution) Water Act on unit-III of Hanuchem Laboratories Unit-III operating from Parwanoo. A seven-day period has been granted to pay this compensation.

A committee headed by SDM Kasauli and comprising representatives of police, State Pollution Control Board (SPCB) and naib tehsildar was constituted by the Member Secretary, SPCB, after the wrong-doing came to light.

The committee examined the unit and its vicinity today and found the unit management guilty of letting out untreated effluent in the drain which made way into the Shivloti nullah. Huge foam was observed over a large stretch of the nullah and a large quantity of untreated effluent was also found stocked in drums in the unit premises in violation of the norms on its premises.

Pardeep Kumar, Assistant Environmental Engineer, SPCB, Parwanoo, said that the unit was sealed today. “The unit management has been directed to scientifically dispose of the untreated effluent found stocked in drums on the unit premises. An environmental compensation of Rs 88,500 has also been imposed.”

The unit management had closed their cosmetic manufacturing unit and begun a pharmaceutical manufacturing unit though mandatory consent had not been sought. In the absence of apt effluent treatment system, the effluents were being discharged into the open drain.

The drain connecting the unit finds its way into the Sukhna Nullah which confluences into Kaushalya river in the neighbouring Haryana. Contamination of this water with industrial effluents is an inter-state issue. A district-level task force has been constituted to improve its quality.