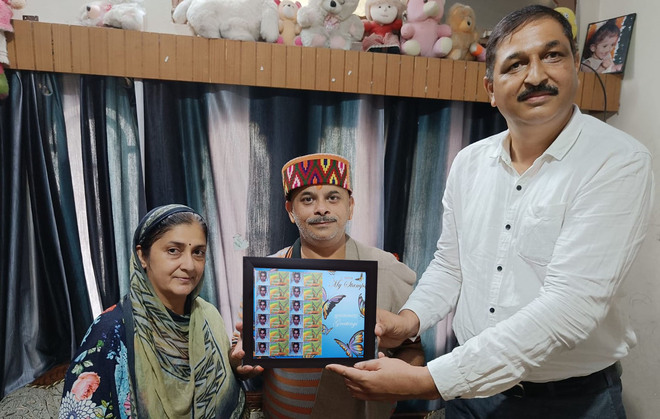 The Postal Department released a ticket on freedom fighter Devi Das Gulzar at Nadaun near here today. Sandeep Dharmani, assistant superintendent of post, while handing over the ticket to the kin of the freedom fighter, said it was released to acknowledge and honour Gulzar’s contribution to the freedom struggle of the country. The plate of ticket was received by Gulzar’s son Nishpaksh Bharti.

Dharmani said the department was releasing the ticket to celebrate Amrit Mahotsav. Gulzar was the first person of the district to get this rare honour.

Gulzar was born on April 30, 1929, at Nadaun. His mother died when he was just one year old. He moved to Lahore at an early age with his father Dasondi Ram and started participating in revolutionary activities in 1945, while he was still a student of Class VIII. He met Asif Ali, Munshi Ahmaddeen and Raj Chadda there.

His first attack was on the car of a governor when he was in Class IX. Gulzar was arrested, along with 12 other revolutionaries, when he went to receive Jai Prakash Narayan at the Lahore railway station. He continued his studies and served as a teacher in government schools after the independence struggle. He also wrote fiction and poetry in Urdu and Persian. He died on January 26, 2011. — OC