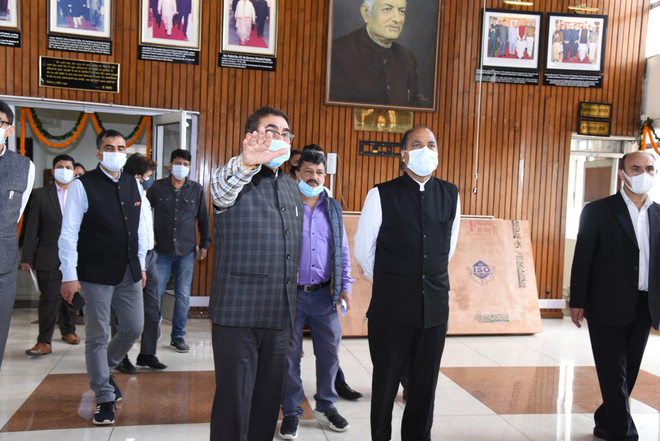 CM Jai Ram Thakur, on Wednesday, takes stock of the arrangements in the Vidhan Sabha, ahead of the President’s visit, in Shimla.

Security has been beefed up in Shimla city ahead of President Ram Nath Kovind’s four-day visit beginning tomorrow. Police, CID and the staff of other security agencies have been deployed in strength at all vulnerable places and the movement of vehicles have been restricted between Kennedy House and Boileauganj from September 16 to 19, as Oberoi Cecil hotel, where the President will stay, is located on this road.

The security arrangements have also been scaled up at the Annadale ground where the President’s helicopter will land around noon tomorrow, besides all other places he will be visiting. Policemen in uniform and plain clothes have been deployed at every few metres from Annadale to Oberoi Cecil. SPG personnel have been positioned at Oberoi Cecil and 43 rooms of the hotel have been got vacated.

The event is above party politics and I assure the government of full cooperation of the Congress. —Mukesh Agnihotri, Leader of opposition

The President will address a special session of the Vidhan Sabha to mark the golden jubilee of the statehood on September 17 and visit the National Academy of Audit and Accounts on September 18.

The process to conduct the RT-PCR test of all persons, who will come in the close proximity of the President, has started. Speaker Vipin Singh Parmar got the test done today. All present and former MLAs attending the special session and the staff of the Vidhan Sabha, security and the staff of Oberoi Cecil will also undergo the test.

Meanwhile, Chief Minister Jai Ram Thakur took stock of the arrangements at the Vidhan Sabha and at an all-party meeting sought the full cooperation of the leaders of all political parties.

Leader of the Opposition Mukesh Agnihotri said that the event was above party politics and assured the government of full cooperation of the Congress. The Speaker said that 73 former MPs and MLAs had given their consent to take part in the event.