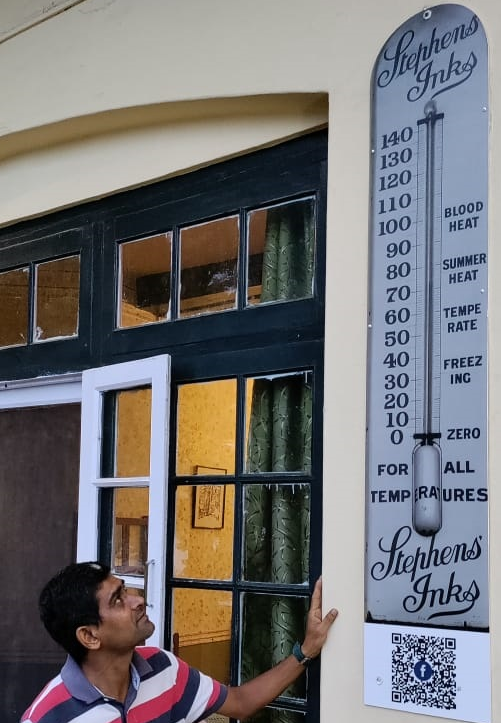 Ashwani Kumar installs a print out of the thermometer outside Alasia hotel in Kasauli.

A British-era Stephens Inks thermometer, installed in front of hotel Alasia was stolen in December 2020 and now owners of the vintage Stephens Inks signage have been receiving queries from strangers in the town.

The British-era Stephens Inks thermometer was stolen in December 2020 and now owners of the vintage Stephens Inks signage have been receiving queries from strangers in the town. This has raised the alarm among historians and those having keen interest in such artifacts.

This has raised the alarm among historians and those having keen interest in such artifacts.

Ashwani Kumar, a Chandigarh resident, who has a penchant for such objects, said, “The authorities should wake up and ensure that such relics are well-protected as these can fetch lakhs of rupees internationally.”

Anand Sethi, a historian at Dagshai, said, “Various online platforms like Art Loss Register which maintains the world’s largest private database of stolen antiques, ‘Stolen Works of Art Database’, which is an INTERPOL tool, can help trace such thefts.”

“By using such platforms, we will try to trace the thermometer. The help of the Association for Research into Crimes against Art can also be taken for the purpose.”

Ashwani installed a flex sheet printed replica of the British Era large thermometer outside the hotel on Saturday to give a feel of the original piece.

Though it is barely a print out but according to Ashwani, “Something is better than nothing,” as the empty space left behind made one nostalgic. Passersby were accustomed to take a glance at the thermometer.”

Hotel manager Devinder Kumar said it was in the morning of December 25, 2020, that the thermometer was found missing. “Security personal were informed about the theft that had taken place the previous night. Since the CCTV cameras were not functional, there was no clue about the miscreants.”

“Queries about its auction had been pouring in when the hotel had re-opened after the pandemic in 2020. An FIR was lodged after an unsuccessful search,” added he.

Fearing that the original thermometer could have found its way to an auction, Ashwani says, “It was not only in the working condition but also belonged to the British-era. It was a Stephens Inks product, which revolutionised office life in the latter half of the 19th century saving office clerks’ time spent previously in mixing powdered inks and keeping the nibs immaculately clean.”

Stephens Inks was invented by the British physician Dr Henry Stephens, who developed his indelible blue-black writing fluid in 1832. Stephens Inks made such thermometers for advertising outside the shops of the news agents and on the buildings.