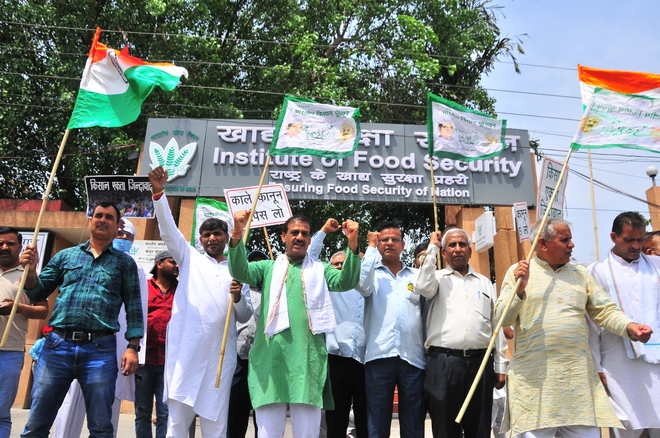 The protesters expressed anguish over the Union Government’s decision to seek farmers’ land records for online payments to their accounts and demanded its immediate rollback.

The Samyukt Kisan Morcha has given the call to mark April 5 as the “FCI Bachao Diwas”.

In Panipat, Kuldeep Balana of the BKU said, “Last year, the state government had procured wheat with moisture content up to 14 per cent. But this year, the moisture content threshold has been reduced to 12 per cent, making it difficult for farmers to sell their crop.”

They said the protest at the Delhi borders would continue until the farm laws were repealed.

In Palwal, hundreds of BKU activists and members of 52 “pals” (khaps) staged a outside the FCI godown.

Swami Shradhanand Saraswati and Master Mahender Chauhan from the 52 “pals” said the Centre was least concerned about farmers who were protesting for the past four months.

In Rohtak, farmers assembled at Mansarovar Park and took out a procession to the FCI office. Inderjit Singh, an SKM leader, said, “Central policies made the FCI bankrupt. If procurement by the state is weakened, the Public Distribution System will collapse, leading to mass hunger.”