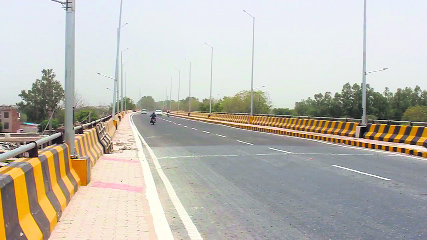 Chief Minister Manohar Lal Khattar today inaugurated and laid the foundation stones of several projects in 16 districts during a state-level programme held through video-conferencing from here.

Karnal: Scores of farmers on Thursday opposed the visit of MoS for Women and Child Welfare Kamlesh Dhanda when she reached the Kaithal Mini-Secretariat to inaugurate development projects symbolically. These had been dedicated by the CM from Chandigarh via videoconferencing. On the BKU (Charuni) call to oppose the minister’s visit, farmers, carrying black flags, shouted slogans against the minister and the state government. They tried to break the barricades, but were stopped by the police. TNS

These include the inauguration of various projects of more than Rs 200 crore and laying of foundation stone of other projects costing around Rs 900 crore.

The foundation stone of the projects which were laid by the CM include remodeling of augmentation canal with WJC Main Branch in Karnal district, construction of MCH Block and Service Block in the Campus of Civil Hospital, Sector-6, Panchkula, widening and strengthening of Naraingarh Raipur Rani road in Panchkula, widening and strengthening of Kalanwali to Rori road Sirsa, and foundation stone of construction of ITI Building, Pegan village, Jind district.

Developmental projects costing more than Rs 500 crore were dedicated to the people of Karnal district.

The inaugurated projects include 33 KV sub-station at Jatton Gate and two mini sewer cleaning jetting machine for maintaining sewerage. Besides this, the Chief Minister laid the foundation stone of re-modelling of augmentation canal with WJC Main Branch, 33 KV sub-station each at Chakda and Bansa.

Several developmental projects costing more than Rs 160 crore were dedicated to the people of Panchkula district.