Drama was over Governor’s speech, which he abruptly ended, saying it may be considered as read

A high-voltage drama was witnessed outside the Himachal Pradesh Vidhan Sabha on Friday as Congress legislators were allegedly pushed and manhandled by the BJP ministers as Opposition members blocked the Governor’s vehicle while he was leaving after delivering his address on the opening day of the Budget session.

While the Governor was still reading his address, CLP Leader Mukesh Agnihotri stood up and said the address had no mention of price rise, unemployment and other important issues.

As Congress legislators tried to disrupt the Governor’s address, Bandaru Dattatraya abruptly ended his speech and said it may be considered as read.

Following this, the Governor and the ministers went to have tea, while the Congress legislators went and sat outside the gate from where Dattatraya had to leave. 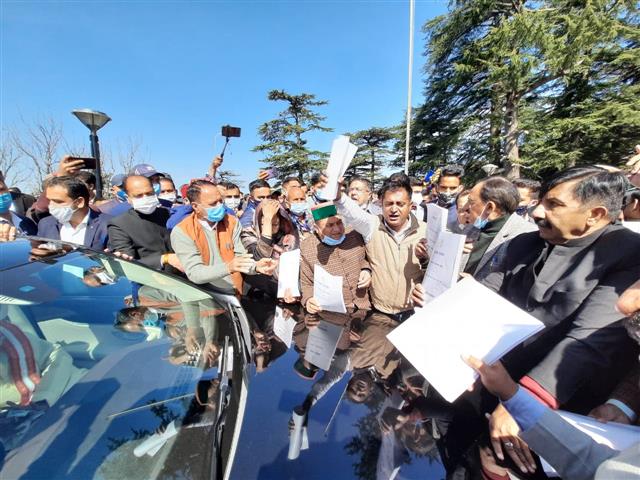 Finally, the ministers and the police pushed away the Congress legislators even as Agnihotri lay on the bonnet of the Governor’s vehicle.

Agnihotri said it was for the first time in the history of Himachal Vidhan Sabha that the Governor allegedly ran away after reading two pages of his address. “The address is a bundle of lies, with no mention of corruption in Covid management, unemployment, price rise and back-door entries,” said Agnihotri. He said the government must explain why the Governor read only two pages and left. We were not invited when the Governor came, so we wanted to ask him why he chose not read the 65-page Governor address, said Agnohotri.

The CLP Leader claimed the Governor did not even read half the address and left in six-seven minutes. “The monsoon session could not be held and since it is being held almost after a year, at least the Governor should have read the entire address, even if it is a bundle of lies and false claims,” said Agnihotri.

“We were all manhandled even though we were raising slogans and did not touch the Governor, CM or ministers, yet the police and BJP MLAs and ministers dragged and pushed us,” he alleged. "We wanted to talk to the Governor but we were pushed and now we will give notice for privilege over the manner we were manhandled," he added.

Parliamentary Affairs Minister Suresh Bhardwaj said the governor was manhandled when he was going to his vehicle after the session, and moved a motion to suspend five Congress MLAs -- Leader of the Opposition Mukesh Agnihotri and MLAs Harsh Vardhan Chauhan, Sunder Singh Thakur, Satpal Raizada and Vinay Kumar.

The Assembly, which was adjourned till 2 pm on Monday earlier in the day, was reconvened at 1 pm on Friday to consider the motion moved by Bhardwaj.

Five Congress legislators, including Mukesh Agnihotri, have been suspended for the entire session, which will conclude on March 20.

He said action was taken as per rules, adding that “nobody was above the law”.

Chief Minister Jai Ram Thakur said the Governor’s ADC was manhandled by CLP leader. This was against the traditions of Himachal assembly, said the CM.