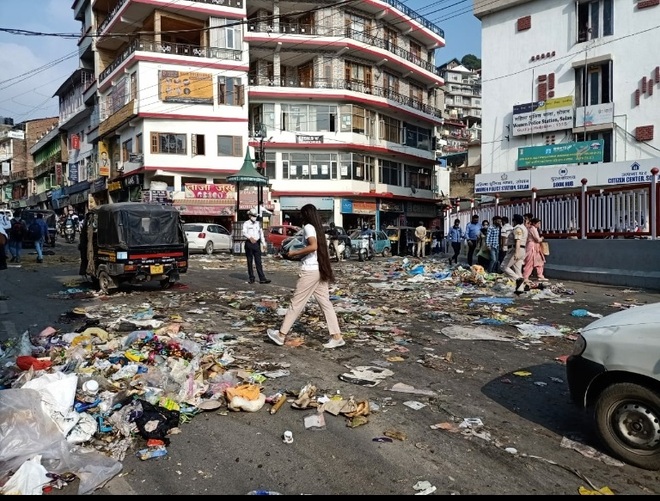 Garbage strewn at the old DC office chowk in Solan.

Safai karamcharis of the Solan Municipal Council today dumped truckloads of garbage at the old DC Office chowk in protest against the “manhandling” of a fellow worker by a trader this morning. They said they were removing hoardings, as per the official directions, in the Kotla Nullah area of the town when the incident took place.

Solan SDM Ajay Yadav said though the safai karamcharis went to the local police station to complaint against the trader, Uday Raj, but no FIR was lodged by them. They were pressing for an apology. They later registered a protest with the officials of the civic body. But failing to get an amicable response, they dumped mounds of garbage at the chowk, Yadav said.

This brought the traffic to a halt and created chaos for over five hours at the chowk, where traffic from three roads converges. The police had a tough time in handling the situation as the workers were adamant that the trader be brought to the chowk and an apology be tendered before the public.

It also created an unsavoury situation before the administration as the workers failed to budge and raised slogans in support for their demand for hours.

The SDM finally reached the spot after a few hours and managed to pacify the agitating employees after a marathon exercise.

KC Chaman, Solan Deputy Commissioner, said the grouse of the safai karamcharis was addressed as the erring trader was booked but it was unfortunate that they held the protest. It was improper to obstruct traffic and cause inconvenience to people when the police had taken action, he added.

DSP Ramesh Sharma said that the trader had been booked under the IPC and the SC/ ST Atrocities Act and he had been detained.