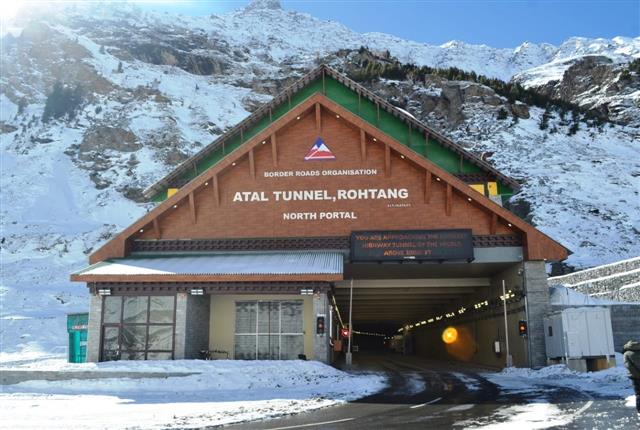 The North portal of the Atal Tunnel in Rohtang.

Deputy Commissioner Lahaul-Spiti Neeraj Kumar held a meeting with the officials of the BRO regarding the safety features inside the Atal Tunnel. The Deputy Commissioner stressed on the need that the tourists as well as local people should be aware of these features and arrangements so that they are able to defend themselves in the case of any exigency.

The officials of the BRO gave information about various aspects of disaster and security in the strategically important double-lane 9.02-km-long Atal Tunnel completed at a cost of Rs 3,200 crore. BRO Chief Engineer VK Singh said that Atal Tunnel and the roads leading to its portals were completely safe. The tunnel was an unmatched example of engineering and it was

well equipped to deal with any disaster. He added that the BRO was also working on some other plans which will give new dimensions to this important tunnel in

the times to come.

Lt Col Sunny said that the emergency egress doors that automatically open at every 150 meter distance had been installed inside the tunnel. Any person can open this door and quickly communicate with the control room with one touch button.

With the help of the state-of-the-art cameras, the control room can see and hear the rescuers through both audio and video medium. On the basis of this the patrolling team will respond for help. This system which is based on radio communication and the network works round the clock. It will continue to work even in the event of a mobile network failure.

Boards showing the distance of both ends have been installed in the escape tunnel under each emergency egress door. Automated equipment also maintains ventilation and air quality monitoring facilities are present after every one km.

Sunny said that a state-of-art facility had also been added for firefighting at the time of disaster in the main tunnel. Due to automatic pressure in the firefighting system, a person can put out the fire himself in the event of fire in the vehicle. Surveillance is maintained by CCTV cameras. Apart from this, digital boards showing the speed limit at various places warn the drivers to keep the speed under control.