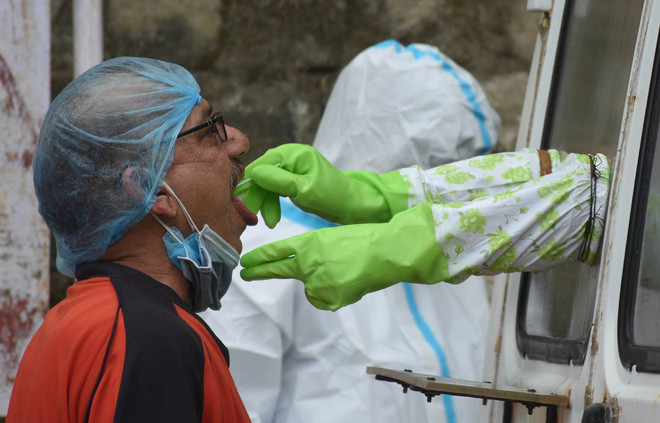 Corona Sample being taken out in Mandi on Thursday. Photo Jai Kumar

The state witnessed 309 new cases, taking the tally to 12,438 today. In the last 24 hours, there have been seven deaths, which include three in Mandi, two in Kangra and one each in Sirmaur and Kinnaur. With this, the number of deaths touched 124.

Three deaths due to Covid-19 were reported in Mandi district on Monday. According to the district health authorities, Sunita Kumari (60), a resident of old Manali in Kullu district, Tikeshwar Sharma (80), a resident of Samkhetar, and Jai Chand (66), a native of Sarkah village in Sundernagar, succumbed to the virus at Medical College, Mandi. Dr Jeevanand Chauhan, Medical Superintendent of Medical College, Mandi, said that the woman was suffering from some chronic illness.

Three more persons died of coronavirus in Kangra on Monday, taking the total number of deaths due to the pandemic in the district to 31. A 74-year-old resident of Mataur village was admitted to Tanda medical college on September 19 due to respiratory disorder. He died this afternoon.

A woman of Amb in Una and a man of Barsar village near Palampur died at Tanda medical college.

Twentyfour cases were reported in Solan, Baddi, Parwanoo and Nalagarh in Solan district. As many as 13 persons had influenza-like infection. Twentyone cases, including a policeman from Shillai, were reported in Paonta Sahib, Rajgarh, Nahan and Pacchad in Sirmaur district.