Shimla-Delhi flights restored after gap of over two years : The Tribune India

50 per cent seats on flights to be sold at subsidised fare of Rs 2,480 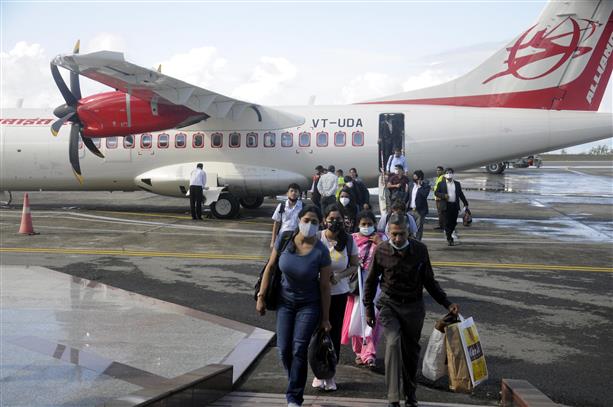 Flights were suspended from Shimla airport due to Covid.

It is after nearly two-and-a-half years that the state capital finally got air connectivity with the Alliance Air aircraft landing at the Jubbarhatti airport from Delhi this morning.

Though the flights were to be resumed on September 6, inclement weather conditions hampered the restoration of the flights.

The Chief Minister said the connectivity remained a big challenge in a hilly state like Himachal Pradesh and the government was making efforts to enhance the air connectivity. Due to technical reasons, flights could not be operated from the Shimla airport for almost two years. With the efforts of the government and the support of the Union Ministry of Civil Aviation, Alliance Air flights between Shimla and Delhi would now be operated seven days a week.

Thakur said the ATR-42-600 aircraft would carry 48 passengers from Delhi to Shimla, while the maximum strength on return flight would be 24. He said 50 per cent seats on these flights would have a subsidised fare of Rs 2,480 while the fare for other seats would be determined by the company.

The CM said various formalities regarding the proposed international greenfield airport in Mandi were being completed on priority and the government was trying its best to turn this dream project into a reality. The flight would not just connect Delhi but also Dharamsala and Kullu. Air Alliance acquired a new fixed wing aircraft ATR -42 (600) which has been pressed into service between Shimla-Delhi-Shimla.

While the two airports at Bhuntar in Kullu and Gaggal in Dharamsala have regular and reliable air connectivity, the tourism sector in Shimla has suffered due to the absence of regular and dependable flights from the Jubbarhatti airport, near here.

Efforts to link Shimla through heli-taxi have also failed to take off, affecting the arrival of high-end tourists. Some of the luxury hotels in the state capital had even agreed to take guarantee for some seats in case air connectivity was resumed.