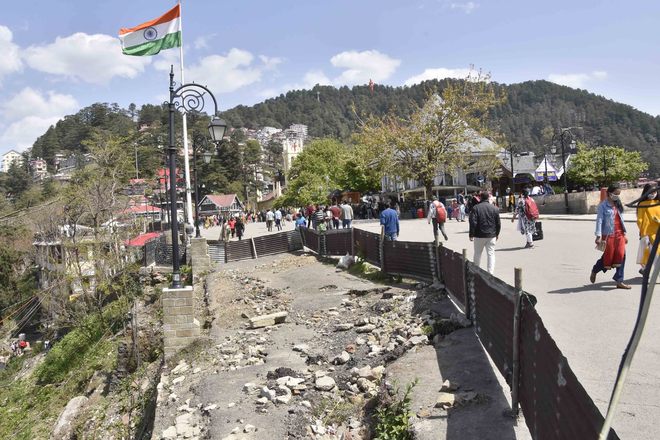 A sinking portion of the historic Ridge in Shimla. Tribune photo

The restoration plan of The Ridge has hit a snag with a sharp rise in the budgetary estimates. The Shimla Smart City Mission had approved an estimated budget of Rs 15 crore for the first phase of the project, but the cost of execution has now escalated to Rs 27 crore.

“We will send the revised cost of the project to the Smart City Mission. In case it enhances the budget, we will go ahead with the original plan. In case the budget is not increased, we may reduce the scope of the work and focus only on that stretch from where The Ridge is sinking,” said a PWD official.

Smart City GM (technical) Nitin Garg said the revised budget, as and when it was sent by the PWD, would be put up at a meeting of the Smart City Board of Directors.

“That’s a steep hike in the budget, so it will have to be put up for consideration of the Board of Directors. Once the reason behind this escalation is ascertained, only then some decision could be taken,” said Garg.

IIT-Roorkee has prepared the project design that includes building a big structure to support the sinking portion of The Ridge. The institute pegged the project cost at Rs 27 crore.

“The cost is much more than we had anticipated. So we sent the plan to three other firms to review the cost. All three have come up with almost the same estimate as IIT-Roorkee,” said the PWD official, adding that the structure would cost around Rs 4-5 crore and the stabilisation of soil and strengthening would cost Rs 22 crore.

According to the official, the cost has escalated because of the proposed use of micropiles technology for the project. The use of this technology helps reach the hard strata without having to dig up the surface and lay a strong foundation. “The use of micropiles and accompanying machines has shot up the cost. We will try and float tenders as soon we hear from the Smart City,” he added.

Use of micropiles tech