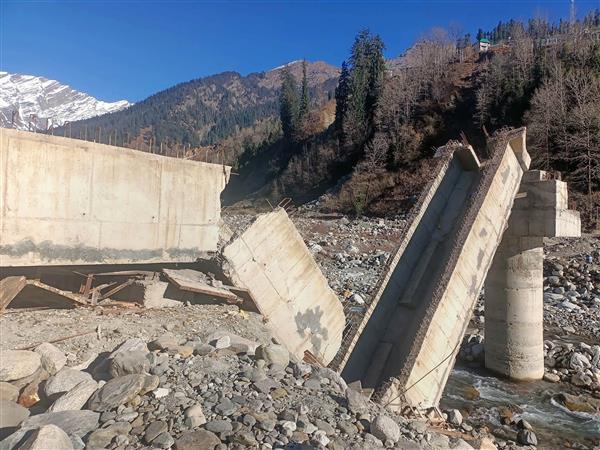 The dismantled bridge at Solang nullah in Manali on Sunday. pti

An under-construction bridge over Solang nullah in Manali, which had been hanging fire for the past seven years, was dismantled after the Public Works Department (PWD) flagged its substandard work. Its contractor was earlier penalised for delaying the work.

Anup Sharma, Executive Engineer, PWD, Manali, said the department inspected the bridge, a crucial link to Solang village, twice in August and September and found its construction substandard. The contract was cancelled in September and a penalty of Rs 29.18 lakh was imposed on the contractor, who was directed to dismantle the bridge and clear the site.

Sharma said a new tender was awarded in October. The bridge would be constructed afresh, but the pillars would be retained. It would be ready by next year.

The project had remained mired in controversies. The work had been progressing at a snail’s pace since its stone was laid in May 2015.

The delay had increased the hardships of residents of Solang village, who had even boycotted the Lok Sabha elections. Two children were washed away as a makeshift footbridge over the nullah collapsed on August 15 this year. The villagers had held PWD officials, who had come to inspect the spot, hostage amidst an overflowing nullah for a couple of hours.