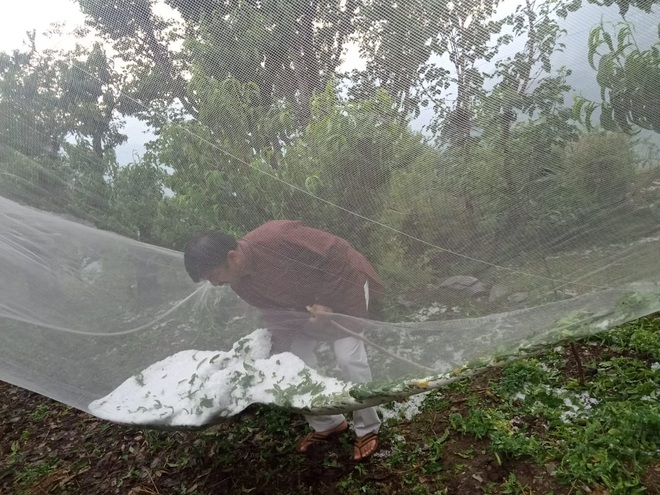 A fruit grower looks at a torn protection net in his field after hailstone in Sirmaur district.

Loss worth Rs 43.25 lakh has been suffered by the fruit growers in Sirmaur district, including Asia Peach valley of Rajgarh, in the stormy weather which caused rain and hailstones from May 29 to May 31.

The windy weather also led to uprooting of tender plants. Harvesting of stone fruits like peach, plum and apricot was underway in the district as it is the peak season. The nets erected by the fruit growers for protection were torn with the hailstones as they were unable to withstand their weight.

The unprecedented hails which lashed the district unleased a trail of destruction in the fruit belt which was almost ready for being harvested. Frequent hail and rain, which occurred in May, has left the fruit growers reeling under huge losses.

Deputy Commissioner, Sirmaur, Dr RK Pruthi said loss worth Rs 43.25 lakh has been suffered by the fruit growers. An area of 605 hectares has suffered more than 33 per cent loss.

“As many as 1,168 farmers have suffered losses amounting to 486 metric tonne which was almost 30 to 40 per cent of the total yield,” said Pruthi.

have been hit by the inclement weather.

Apart from 400 apple growers, loss has been suffered by plum, apricot and peach growers.

The Rajgarh area of the district is known as the peach valley of Asia. As many as 360 peach growers have suffered crop loss due to hailstones. Apart from this, 100 plum and apricot growers and 45 litchi growers have also suffered losses.

The district also has sizeable number of mango growers and 263 growers have suffered loss.

The nets erected by the fruit growers for protection were torn with the hailstones as they were unable to withstand their weight.