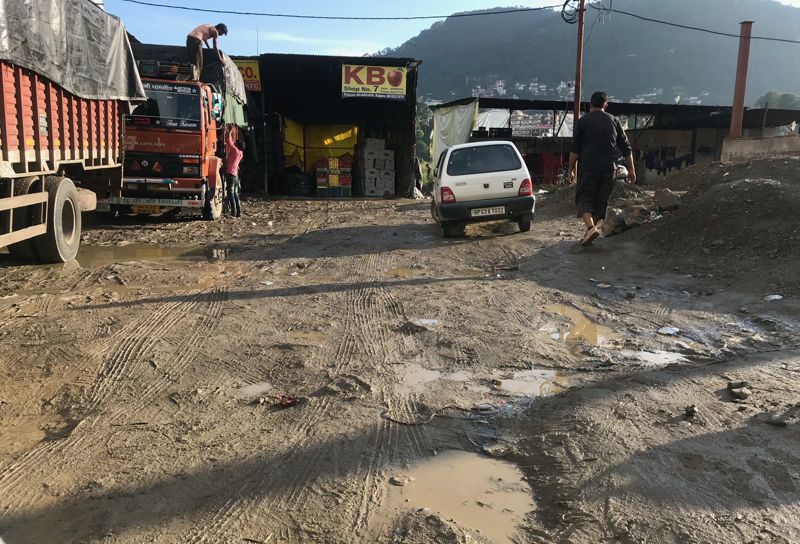 Apple traders are bereft of civic amenities such as toilet and drinking water in the temporary sheds set up outside the APMC along the National Highway-V.

The slushy ground is a breeding ground for mosquitoes. It dissuades customers from coming to the market to buy apples. The situation worsens in the rains when the slush-filled ground makes it difficult for us to display our produce. Vikas, apple grower from Kotkhai

A sub-market yard is being constructed, which will have two sheds with a capacity of 12 shops each. Facilities such as toilets and canteen will be constructed for apple traders. APMC official

Traders rue that the failure to expand marketing facilities in a timely manner was responsible for the pitiable situation. Even though apple trade had been picking up year after year, little had changed in the facilities provided to us, they added.

Apple growers are forced to sell their produce from temporary sheds, where problems aggravate in the rains. Since this road leads to Shimla, it also faces traffic jams at the time of peak summers, which coincides with the apple trading season.

“The slushy ground is a breeding ground for mosquitoes. It dissuades customers from coming to the market to buy apples. Absence of toilets and drinking water facilities is another major cause for concern. The situation worsens in the rains when the slush-filled ground makes it difficult for us to display our produce,” said Vikas, an apple grower who comes to sell his produce from Kotkhai.

“Apart from truck drivers, who accompany the apple consignments, arhtiyas as well as growers visit the APMC on a daily basis for trading. Stench and filth aggravates our woes, which have not been addressed for years,” said Rakesh, another apple grower.

Apple trading is done from 60 temporary sheds provided by the APMC on a 2-hectare area. Though the APMC earns substantial revenue from apple trade, the expansion of facilities has failed to keep pace with the flourishing business.

The apple trade, which registered a business of Rs 130 crore in 2017, touched Rs 150 crore in 2021. It is expected to increase further. A 10 per cent market fee is earned by the APMC annually from apple trading.

Though the work to construct a sub-market yard had begun a few months ago, its completion will some time.

“A sub-market yard is being constructed at a cost of Rs 9.88 crore. It comprises the construction of two sheds with a capacity of 12 shops each. Apart from this, facilities such as toilets and canteen, besides five more shops will be constructed for apple traders,” said an APMC official.