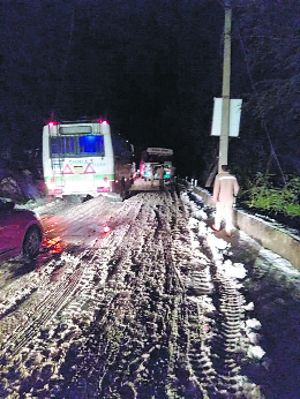 A sleet-covered stretch at Hira Nagar, near Shimla. Tribune photo

Following a heavy hailstorm after snowfall, hundreds of commuters were forced to trek 12-15 km on a slippery road to reach Shimla as over 600 vehicles, including five dozen buses, were stuck between Dhanda and Hira Nagar, near the state capital. The skidding of vehicles on the icy stretch had created a massive traffic jam, running into a few kilometres.

The area was lashed by heavy hail and snow around 5 pm on Saturday, making it difficult for traffic to move on the road. Passengers had to leave their vehicles with their luggage and trudge on foot to reach Shimla. While the district administration and the police got down to the task of clearing the road, the stretch between Totu and Ghanahatti is under the National Highways Authority of India and adequate machinery was not in place to clear the road, said Deputy Commissioner, Shimla, Amit Kashyap.

Over 600 vehicles were stranded on the stretch between Jutogh Cantonment and Hira Nagar and we had to deploy over 40 police personnel to rescue the stranded commuters, said Shimla SP Omapati Jamwal.

There was only one man on the JCB and sand was not available to make the road motorable even as the administration as well as the police worked till 1 am to help the commuters, he added.

In the freezing temperature, people parked their vehicles and walked to their destinations. Long queues were seen on both sides till Banoti and Chakker.

“It was biting cold with rain and hail lashing the area. I had to walk 10 km on the slippery road to reach Shimla from Banuthi (near Ghanahatti) in more than three hours, said Kanshi Ram, a resident of Daldaghat.

The fresh snowfall and sleet also disrupted traffic between Dhalli, Kufri and Chail, and the police had a hard time in clearing the road for vehicles.

Due to fresh snowfall, the road condition on the Kufri-Chail road had turned dangerous and 31 vehicles carrying 187 persons, including women and children, were rescued and lodged at a hotel in Kufri. The overnight rescue operations continued till 4 am on Sunday.