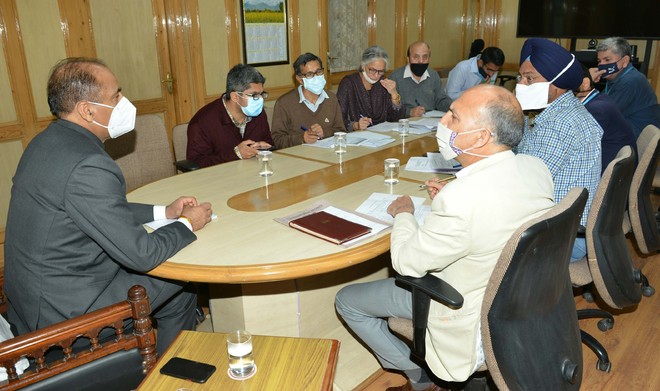 Chief Minister Jai Ram Thakur presides over a meeting with PWD and NHAI officials in Shimla on Thursday. Tribune photo

He was presiding over a meeting with senior officials of both PWD and NHAI. Thakur said all four-laning projects should be completed within a set time frame to avoid cost escalation, besides providing better connectivity in the state.

The Chief Minister said a target should also be fixed to complete the Solan-Kaithalighat stretch of the Kalka-Shimla four-lane project by the end of 2021. He gave directions to make the national highway between Boileauganj-Bhrampukhar-Ghaghas pothole-free by November 15 and to take up patchwork from Nerchowk to Kullu at the earliest keeping in view the winter season.

He said upgrade work on the Jogindernagar-Pathankot, Baddi-Nalagarh and Pinjore-Nalagarh roads should be expedited and completed within the stipulated time period.

Thakur said all issues with regard to the Kaithlighat-Dhalli four-laning project should be resolved at the earliest as 17 structures needed to be removed from this stretch, besides some electric towers.

He directed PWD officials to identify suitable dumping sites on the Solan-Kaithalighat stretch to facilitate the executing agencies. He directed the authorities concerned to shift 13 electric towers along this stretch.

He expressed his concern over the delay in the construction of a bridge over the Beas at Manali, which was causing inconvenience to tourists as well as local people. He directed the authorities to speed up the work.

Regional Officer, NHAI, Gursewak Singh Sangha assured the Chief Minister of ensuring the time-bound completion of all four-laning projects in the state.