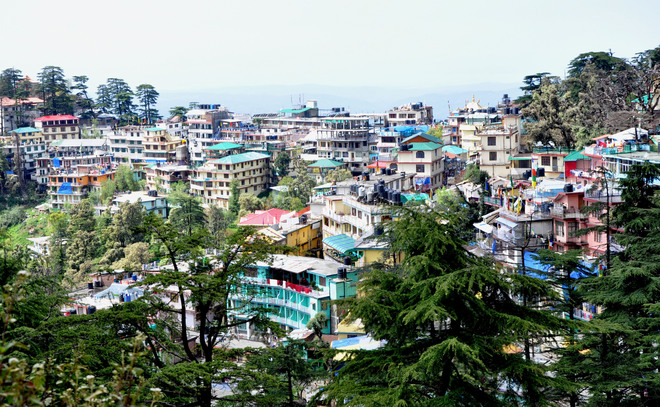 A view of Mcleodganj.

A sudden spurt in coronavirus cases in different parts of the country has cast a shadow on the forthcoming summer tourist season in Dharamsala. Hoteliers are reporting cancellation of room bookings by tourists for the past 10 days. They say that after the recent spurt in Covid cases very few bookings are being received for the summer season.

Ashwani Bamba, president of the Hotel and Restaurant Association of Dharamsala, says, “The summer season (April to June) is the bread and butter of the tourism industry of the region. In April and May, tourists from Gujarat and Maharashtra visit Dharamsala. However, due to the spurt in Covid cases in some states, tourists are cancelling their room bookings. We are trying to convince the tourists but those from Maharashtra, where a lockdown is being reimposed, are expressing their helplessness”.

Bamba says that last year, the tourism industry suffered huge losses. If this season also gets affected for any reason, most of the properties of the hotel owners raised through loans are likely to become non-performing assets (NPAs).

The hoteliers say that states such as Uttarakhand, Rajasthan and Goa have done well to attract tourists. However, in Himachal, despite the fact that the tourism industry provides huge direct and indirect investment, no effort is being made to attract tourists in a safe manner.

They add that even subsidised credit to the hoteliers announced by the state government has not reached small and medium sized hotels.

The tourism industry in Dharamsala has also been affected adversely as establishments of the Tibetan government in-exile and the Dalai Lama, which are the major attractions for national and international tourists, have also been lying closed due to Covid.

The hoteliers are now hoping that tourists from Punjab, Haryana and Delhi will flock to the state during the summer. Some hoteliers say that the Atal Tunnel has become a major attraction for tourists, who prefer to go there, thus affecting tourism business in other parts of the state, including Dharamsala.