Were protesting against delay in takeover of pharmacy college by government 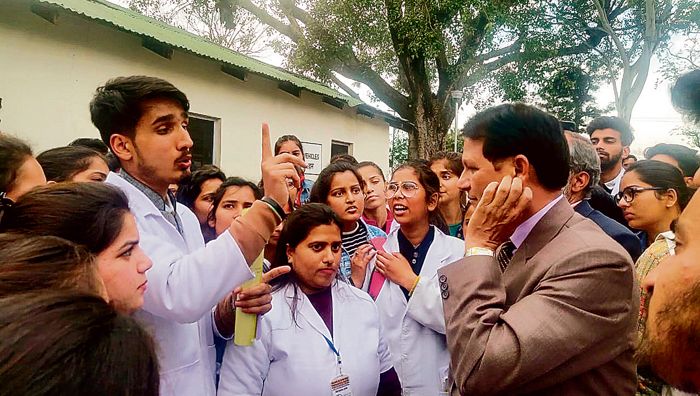 On the first day of the winter sojourn to Kangra today, Chief Minister Jai Ram Thakur faced an angry protest in Paprola from the students of Bachelors in Ayurvedic Pharmacy College. The agitating students, who also blocked the cavalcade of the Chief Minister, were booked by the police.

The students, who were demanding that the government should take over the college, initially met the Chief Minister outside the rally venue in Baijnath. The Chief Minister assured them that he would look into the matter. Later, the students reached Baijnath rest house where Minister for Health Vipin Parmar went out to meet the students.

However, the agitated students, many of whom were girls, allegedly misbehaved with the minister. The students kept sitting in protest at Baijnath rest house till the Chief Minister and other leaders of the party stayed there.

The students also followed the Chief Minister to Paprola Ayurvedic Medical College. They stopped the cavalcade of the Chief Minister and raised slogans against him. The police had to intervene to control them. A girl student fell unconscious in the melee that followed.

The police later registered a case against the agitating students. SP Vimukt Ranjan said a case under Section 341 (wrongful restraint) and 143 (unlawful assembly) of the IPC had been registered against the students.

The College for B Pharma in Ayurveda was started by the previous Congress government. It runs four-year bachelor course in Ayurvedic pharmacy. The college was being run by a society formed by the government. In view of the paucity of funds, the teachers in the college are recruited on temporary basis. The college also lacks basic infrastructure.

During campaigning before the last Lok Sabha elections, the Chief Minister had announced that the government would take over the college.

Later, the matter was brought to the Cabinet. Though the Cabinet cleared taking over of the college, the Finance Department expressed inability to provide budget for it. Due to objection of the department, the college could not be taken over by the government.

The first day of winter sojourn of the Chief Minister was also marked by protests from the ABVP, the student organisation affiliated with the BJP. Activists carried out protests on the campus of Central University Himachal Pradesh (CUHP) and regional centre of the university. They protested lack of facilities at the CUHP and the regional centre of Himachal Pradesh University.