Sympathy vote: Can Congress make up for 2019 defeat in Mandi?

Can sympathy votes in the name of former Chief Minister Virbhadra Singh help the Congress make up for its worst-ever defeat in Mandi by nearly four lakh votes the 2019 parliamentary elections? 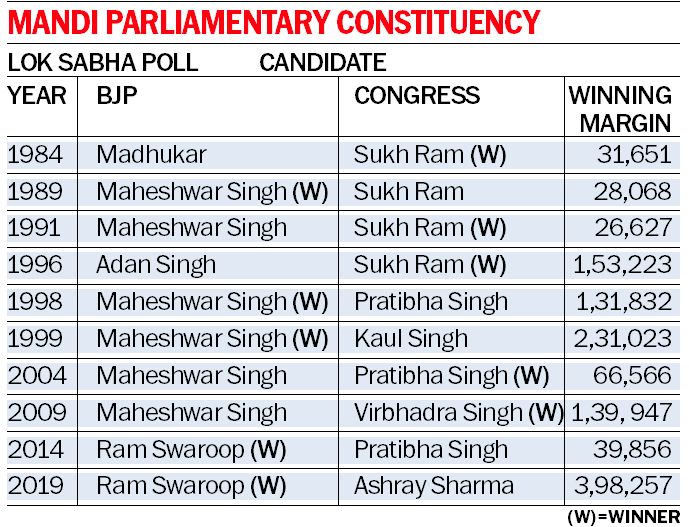 BJP candidate Ram Swaroop, on whose death the Mandi seat had fallen vacant, had trounced Congress candidate Ashray Sharma, grandson of former Union Telecom Minister Sukh Ram, in the 2019 elections. It was for the first time that the Congress failed to get lead even in one of 17 Assembly segments that constitute the Mandi parliamentary constituency. The BJP won the seat by a record margin of 3.98 lakh votes.

Of the past 10 Lok Sabha elections, the BJP and the Congress have won the Mandi seat for five times each. The Congress has fielded Pratibha Singh in the byelection this time in the hope of getting sympathy votes. She has the added advantage of having been the MP from Mandi in 2004 and 2013.

The BJP has reposed faith in Brig Khushal Thakur (retd), a Kargil War hero. He is a known face in Mandi as he had spearheaded the agitation of the Four-Lane Sagharsh Samiti for higher compensation for acquired land.

“Even if the Congress loses the Mandi byelection but manages to get a lead in a few Assembly segments, it will be considered an achievement,” said a senior Congress leader. The three tribal Assembly segments of Kinnaur, Lahaul and Spiti and Bharmour, which are part of the Mandi seat, have traditionally been Congress strongholds and as such Pratibha would be hoping to get a considerable lead there.

The Congress is hoping to get a massive lead in the Rampur Assembly seat, which falls in Shimla district and was home to Virbhadra. Besides, it also hopes to make a dent in the BJP vote bank in the Anni constituency in Kullu, which shares boundary with Rampur, on the opposite banks of the Sutlej.

On the other hand, the prestige of the CM is at stake in the byelection; Mandi is his home turf. In fact, an adverse outcome of the bypoll can spell trouble for Thakur, a five-time MLA from the Seraj constituency in Mandi district.

“The emotions of the people of Mandi are with the BJP and I am confident that people will wholeheartedly support the party candidate,” says the Chief Minister.