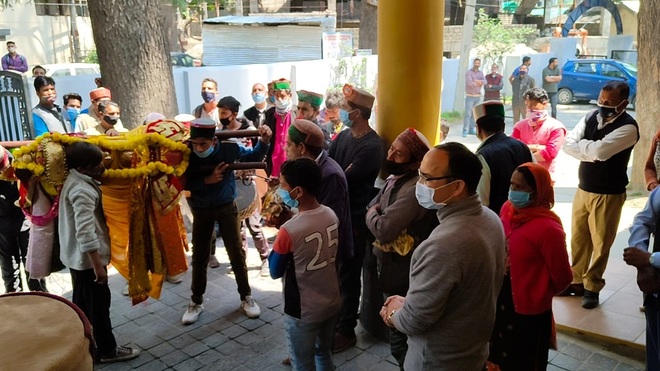 Followers carry the palanquin of deity Shela Bramha at Kullu.

Our Correspondent
Kullu, May

The restrictions imposed on religious activities and temples have drawn the ire of local deity Shela Bramha of Benchi panchayat, near Raison, in the Ujhi valley of the district.

The palanquin of the deity along with ‘kardars’ and ‘devalus’ (volunteers) entered the premises of the Deputy Commissioner’s office today to protest the closure of temples.

The deity through his oracle expressed displeasure over the restrictions imposed on the temples. He said that the temples of gods and goddesses should not be closed.

The deities would protect people from the pandemic but stopping religious activities and events was wrong. People would face serious consequences if the administration interferes with the deity traditions.

The oracle said that the gods and the goddesses would also overcome Covid and there was no need to panic.

Meanwhile, the administration officials appeased the deity. They said that people had been restricted from visiting temples but the priests could organise religious activities and perform daily rituals.

The matter is serious as it involved the religious sentiments of the people and the implementation of the Covid guidelines of the government. The officials, somehow, managed to pacify the deity.