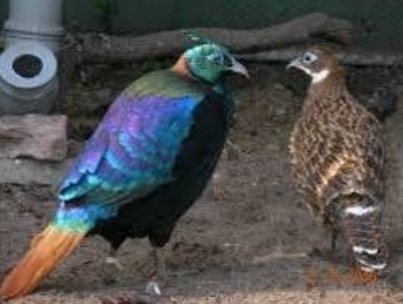 A pair of Himalayan monal in Nehru Pheasantry at Manali. File Photo

The Monal Breeding Centre of the Wildlife Department, Manali, has been successful in breeding three monal birds (Lophophorus impejanus). The 20-day old hatchlings could be seen playing with their mother in the cage in Nehru Pheasantry.

The Nehru Pheasantry was established in 1984 to conserve the monal species, which were on the verge of extinction. The breeding centre was developed separately in the pheasantry in 2015. A monal chick had hatched on May 27, 2017, but it died on June 14, 2017, due to stress, leading to cardio respiratory failure. The monal successfully bred in 2018 for the first time and two of the three hatchlings survived.

Rakesh Kumar, DFO, Wildlife, Kullu, said the breeding of monal had been not successful in the past two years due to some reasons. Some improvements were carried out, after which a pair gave three eggs this year, and all three monal hatchlings were bred naturally, he said.

The DFO said it was a great achievement in terms of conservation of monal species found on the high snowy peaks of the Himalayas. He said this was possible due to planned conservation. Poaching for its crest, human interference with nature and increasing pressure on jungles were some of the causes for dwindling monal numbers. Locally, the male lophophorus impejanus is called monal, while the female is known as kardi.