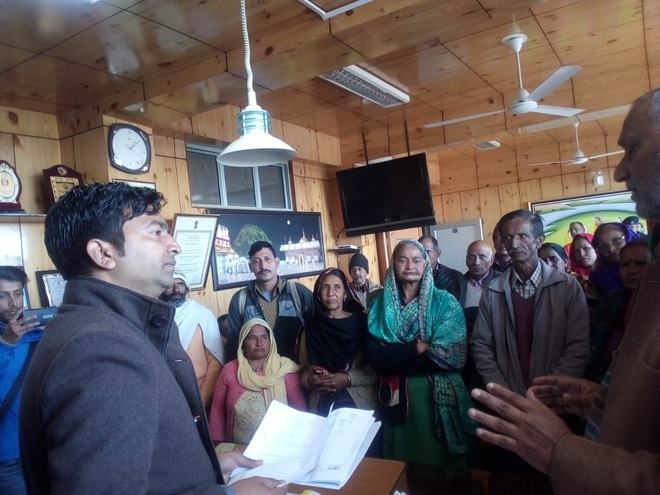 Villagers call on the Kangra DC at Dharamsala on Tuesday. Tribune photo

Hundreds of villagers in Thural today protested the decision of the state government for allotting a part of the Neugal for mining.

Residents said they would fight and not allow mining in their area as it would be a health hazard. Villagers in a large number assembled at Thural and threatened dharna if the authorities would not cancel the site inspection conducted by the SDM, Dheera, yesterday.

Later, a deputation of residents of Thural, headed by ex-MLA Jagjivan Pal, called on DC, Kangra, Rakesh Prajapati and submitted him a memorandum, demanding the cancellation of land lease for mining. They told the DC that if mining was allowed, it would result in large scale environmental degradation and pollution. It would also damage the water supply schemes, water-running saw mills and cremation ground. The DC assured them that he would respect public sentiments and no mining would be allowed.

Information gathered by The Tribune revealed that the NGT had banned mining in the Neugal for three years. Therefore, no part of the river could be leased for mining. Besides, the High Court had also directed the government that no land could be leased without public auction.