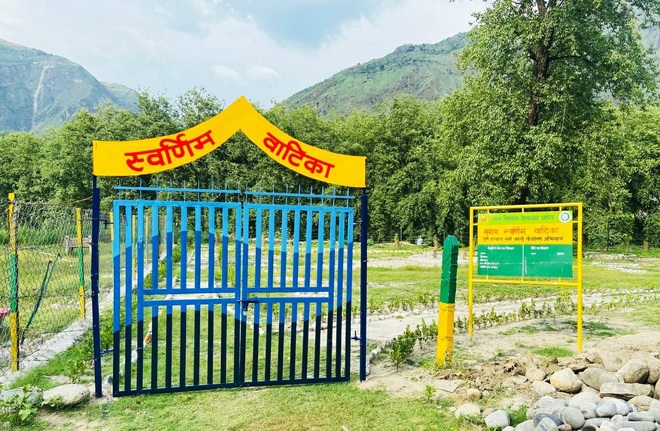 Swarnim Vatika at Shamshi in Kullu.

The Forest Department has released a six-minute documentary to present glimpses of the most scenic places of Parvati forest division in Kullu, which had been groomed by the Forest Department to promote eco-tourism, on the occasion of International Mountain Day on December 11.

IFS officer Aishwarya Raj, Deputy Conservator, Parvati division, Kullu, said the Mountain Day theme of this year is ‘Sustainable mountain tourism’ and the documentary was released on Youtube to market the bounty of nature in the region to promote ecotourism. He said the link had also been posted on the Facebook page of Parvati forest division.

He said, “In the first video, we have focused on the initiatives that the Forest Department has taken on ground to ensure eco-restoration of wastelands and how we can create win-win situations for both nature and people.”

He said the region was home to pristine forests and both high and middle altitude Himalayan ranges. He said the division was spread over 2,011 sq km and included areas of Bhuntar, Jari, Hurla and Kasol. The picturesque treks like Kheer Ganga, Mantalai and Pin Parvati pass beckon the revellers again and again, he said.

Residents have lauded the move of the department. They said such documentaries and teasers of other areas of tourist interest should be showcased widely by the government to boost the tourism industry.