To curb mishaps during trekking, routes to be mapped, classified in Himachal Pradesh 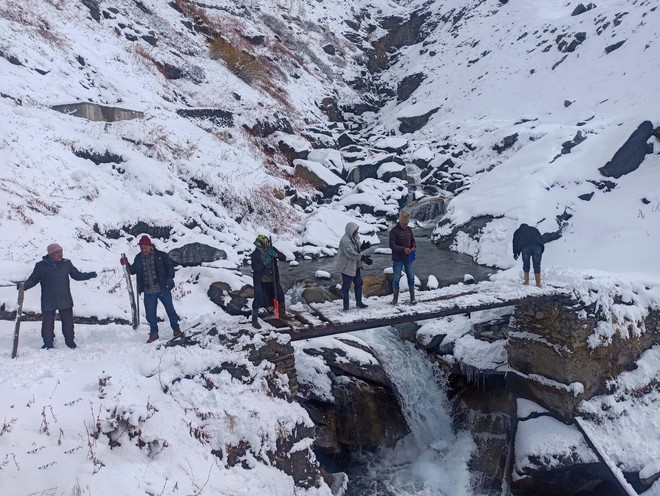 Tourists trek in the snow-covered Sissu area in Lahaul and Spiti. PTI

With several fatal mishaps during trekking in high mountains claiming precious lives, the Himachal Government has decided to undertake mapping of various routes and classify them as red, orange and green, besides developing an app where all those embarking on trekking will have to register themselves.

A meeting was held last week where it was decided to ask the Information Technology (IT) department to design an app on which every trekker embarking on a journey will have to register so that the government has a record of everyone travelling on the route.

The decision has been taken following the death of three tourists belonging to Goa and Maharashtra during a trip from Uttarkashi in Uttarakhand to Sangla in Kinnaur recently.

“All deputy commissioners have been asked to identify trekking routes and zones and provide the details latest by November 10 so that the mapping of all major treks can be completed,” said Amit Kashyap, Director Tourism and Managing Director, HP Tourism Development Corporation.

He added that the mapping would identify arduous, average and easy treks so that tourists undertake them according to their own physical endurance level.

The IT Department has been asked to develop an app so that registration on it can be made mandatory for all tourists as well as locals so that there is a proper record and data of all trekkers. “In case of an emergency, at least we will have the details of the trekkers, their locations, which will help us launch rescue operations,” said Kashyap. Moreover, the mobile phone numbers will be registered on the trekking app. These will also facilitate in rescue and search operations.

The mapping of the major trekking routes will also help travel agents, guides and the trekkers to choose the journey they wish to undertake. With categorisation into red, orange and green, the treks will be planned according to the skills and physical endurance levels of the tourists, reducing chances of mishap in case of inclement weather conditions.

It has been seen that often tourists are taken on trekking expeditions even when there is a warning of inclement weather conditions, eventually leading to mishaps and tourists getting stranded in snow and extreme cold weather. In such conditions, the government has to eventually step in to rescue the trekkers and often helicopter services have to be hired to expedite search and rescue.

The state government has often come in for sharp criticism for not regulating adventure and trekking expeditions, resulting in travel agents planning treks even when there is adverse weather forecast.

The Deputy Commissioner banned all trekking and mountaineering activities in Kinnaur on October 27. This was done as with the onset of winter, it is unsafe to undertake trekking and rescue operations in an emergency becomes difficult.