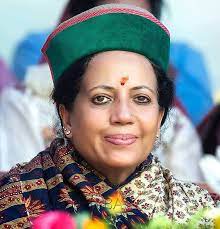 The appointment of Pratibha Singh as the HPCC president is a replay of the 2012 scenario when the Congress handed over the responsibility to her husband and six-time Chief Minister Virbhadra Singh, replacing Kaul Singh Thakur. - File photo

The appointment of Pratibha Singh as the HPCC president is a replay of the 2012 scenario when the Congress handed over the responsibility to her husband and six-time Chief Minister Virbhadra Singh, replacing Kaul Singh Thakur.

Pratibha Singh’s appointment manifests the party’s hope of improving its fortunes and wrest power from the BJP. Virbhadra did ensure the victory of the Congress in the elections.

The Congress is optimist about repeating the performance of the Mandi Lok Sabha byelection on the home turf of Chief Minister Jai Ram Thakur. The Congress has constituted jumbo-size committees apparently to please all and curb dissension before the forthcoming Assembly elections. Due consideration was given to caste, region, and senior leaders in the formation of the committees to present a united face.

The party is also trying to woo women voters (26,58,005) who are only a tad less in number than men (27,18,053) in the state. Pratibha Singh inherits an organisation plagued with factionalism. Her predecessor Kuldeep Singh Rathore had tried to appease senior leaders with some success. The party has little time left for the forthcoming Assembly elections and most leaders will have to focus on their constituencies.

Pratibha Singh faces several challenges, including the election to the Shimla Municipal Corporation. State in-charge of Congress affairs Rajiv Shukla and his team will play a major role in the formulation of the election strategy.

The Congress also faces a resource crunch and the onus of raising funds will be on the party candidates. The BJP, on the other hand, does not have the money problem. It has dedicated party cadres and a strong organisation.

The Congress leadership has refrained from announcing the chief ministerial candidate. However, Pratibha, who has the advantage of the victory in the Mandi byelection and the emotional connect with people, seems to be the favourite. As she will not be contesting the Assembly election, she can freely travel across the state to campaign for the party candidates.

(The views expressed in the article are personal)