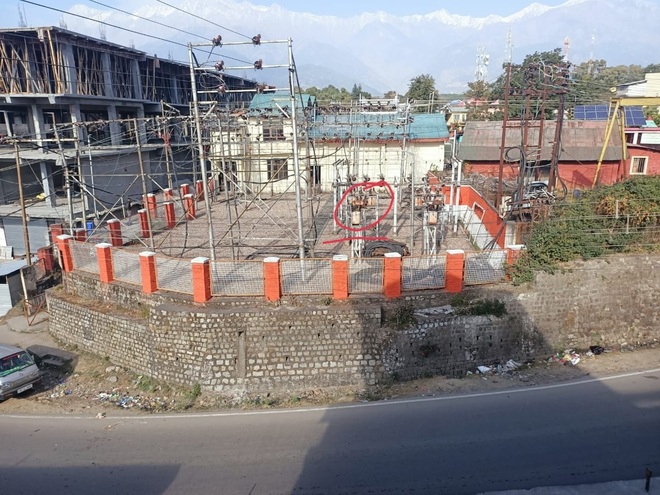 The power substation in Maranda. Photo by writer

Most parts of Palampur and its satellite areas have been facing power cuts for the past two days after a snag developed in one of the transformers of the Maranda power substation. Only one transformer is functional, so the HPSEB has resorted to power cuts during peak hours in the morning and evening to maintain the supply to the town.

No land for substation

The HPSEBL had made several plans for setting up a separate power substation for Palampur, but they could not materialise. The HPSEBL has also failed to get land for the substation. HPSEBL official

The 50-year-old Maranda power substation feeds 80 per cent of the areas and is unable to bear the load, which has multiplied several times in the past 10 years. This substation was set up in 1970 to feed the population of 5,000, which has already crossed over 75,000.

Urbanisation has taken place in Palampur. Over 10,000 houses with new colonies have come up, but the power infrastructure is the same. At present, the satellite areas of Palampur have no power substation and its satellite areas also rely on the Maranda feeder.

The HPSEBL had made several plans for setting up a separate power substation for Palampur, but these could not materialise. The HPSEBL has also failed to get land for the substation.

An HPSEBL official said a piece of land had been earmarked for the substation near the local ITI. However, the state and the Palampur MC had not given no-objection certificate, he said. He said there was no shortage of funds with the HPSEBL. If the land was available, the project could be taken up within two months, he said.