Truck collision at Parwanoo disrupts traffic for over 2 hrs : The Tribune India

Truck collision at Parwanoo disrupts traffic for over 2 hrs 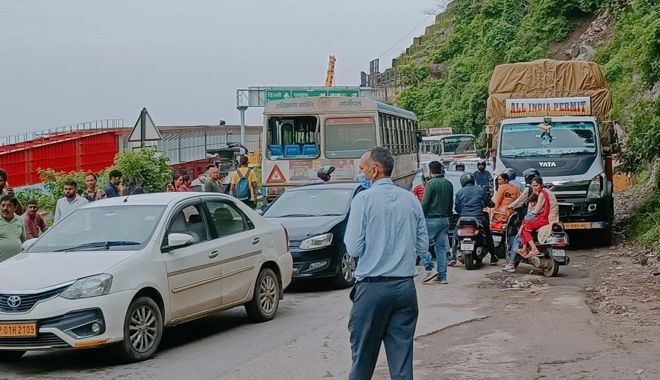 Traffic on the Parwanoo-Dharampur section was hit on Monday morning after truck collision.

Traffic on the Parwanoo-Dharampur section of the national highway was hit for nearly two-and-a-half hours as a truck rammed into another. As a result of the collision, traffic on the road remained halted near Timber Trail Resorts this morning.

The disruption led to a long traffic jam as vehicles queued up on both sides.

Preliminary information revealed that overheating caused a mechanical failure in a truck which was carrying apples on Shimla-Chandigarh road.

DSP Parwanoo Pranav Chauhan said the driver failed to apply brakes in the loaded truck probably owing to overheating. This led to the mishap. There was no loss of life.

A Haryana roadways bus (HR-69-C-5910), which was trying to cross the highway where the first truck had halted, was hit by another apple laden truck (HR-56-B-2094) from behind. This truck too reportedly developed a mechanical snag and rammed into a hill after hitting the bus from behind.

A passenger Bala Ram (33) sustained injuries and he was taken to Parwanoo for treatment. Other passengers were safe. They were shifted to other buses. The bus was going to Shimla.

Cranes were pressed into service to remove the stranded trucks from the highway as they had blocked the traffic.

Another truck turned turtle near the gate of Timber Trail Resorts. Its occupants, however, escaped unhurt.

Since a viaduct bridge is under construction close to Timber Trail Resorts, the width of the road has narrowed down and any obstruction leads to a long traffic jam.