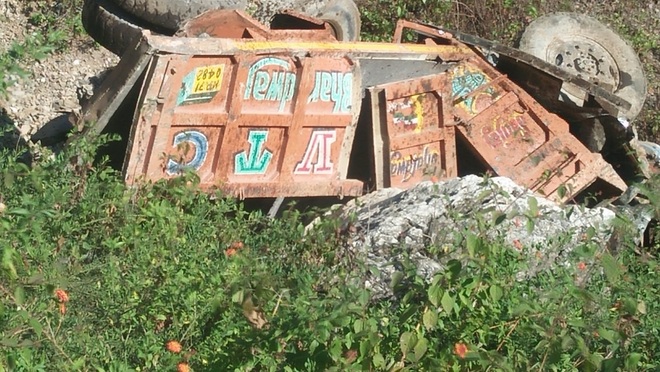 The ill-fated truck which rolled down a hill in Sangrah subdivision of Sirmaur district on Tuesday.

Three persons were killed and two others seriously injured when the truck (HP 71-0482) they were travelling in rolled down the road at Khadon Khar village near Nera Baga in Sangrah subdivision of Sirmaur district around 11.30 am today. The truck was engaged at a limestone mine and was returning after unloading material when the mishap occurred.

Additional SP, Sirmaur, Babita Rana said that two persons were killed on the spot while one injured person died at a hospital at Nahan. A case of rash and negligent driving has been registered and a probe has been launched to ascertain the cause of the accident.

A police team reached the spot to rescue the accident victims soon after receiving information. The bodies were sent for a postmortem examination. Meanwhile, Sangrah SDM Vikram Negi disbursed relief to the next of kin of the dead and to the injured.

The seriously injured were shifted to the Dadahu hospital and from there they were referred to the medical college at Nahan. The injured have been identified as Pawan (19) and Sanjay (22), both residents of villages in Sangrah tehsil. Sanjay was driving the ill-fated truck.