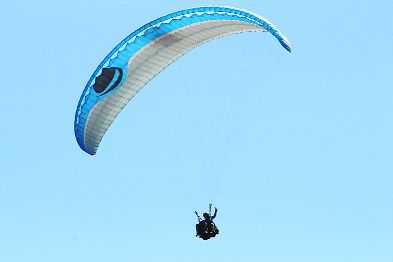 Four persons, including two tourists, had a narrow escape when their paragliders got stuck in trees near Bir, 30 km from here, last evening.

Both paragliders took off from Billing in tandem flights with two tourists. After a few minutes, the pilots lost control because of bad weather and high-velocity wind. They tried to land at a safer place, but were caught in trees. A big tragedy was averted as there were no power transmission lines nearby. Both pilots contacted the ground rescue teams on mobile phones, which reached the spot immediately and rescued all four persons. A police team shifted the injured to the Civil Hospital, Baijnath, where their condition was stated to be out of danger. Last year, Delhi-based pilot Rohit Badhoria was killed after his glider crash-landed in Dhauladhar hills. In 2019, Singaporean pilot Kok Chang had died after his paraglider crash-landed near Jalsu pass.

A Russian and a Latvian pilot sustained serious injuries when their gliders crashed near Jhatingari (Mandi) and Bundla hills (Palampur), respectively. — OC