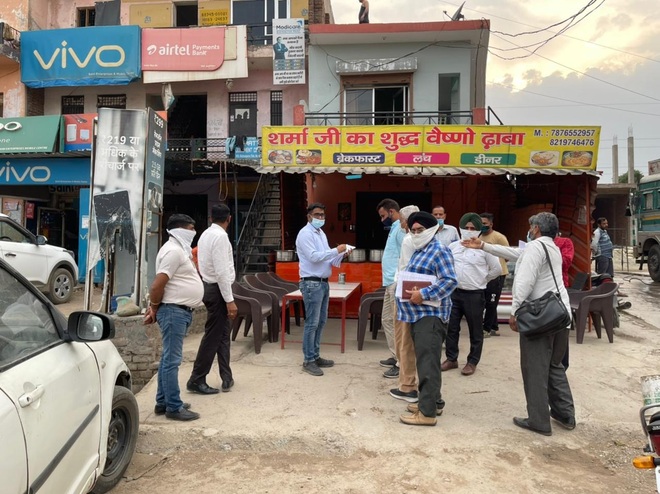 Officials of the Competent Authority for Land Acquisition at work along the Baddi-Nalagarh highway. Tribune photo

Physical verification of the 415 structures, which would be dismantled for four-laning the Baddi-Nalagarh highway, began today with officials of the Competent Authority for Land Acquisition (CALA) initiating the process today.

A stretch of 36 km is to be four-laned from Pinjore to Nalagarh, out of which 17.37 km lies in Himachal and the remaining is in Haryana.

Sub Divisional Magistrate (SDM), Nalagarh, Mahinder Pal, who heads the authority said, “We will complete the physical verification of the 415 structures in the next 15 days and this will pave the way for inviting tenders for four laning this 17.37-km of the road falling in Himachal.”

The four-lane will have 39-m width and 2,190 trees will be axed for widening this road. Initially, a 45-m width highway was supposed to be constructed but its width was reduced to 39-m last year after much deliberations in a bid to bring down the cost of land acquisition.

The project, which has been hanging fire for years, will be finally initiated now as major impediments have been cleared. Four-laning of this highway was a dire necessity in view of the heavy vehicular traffic. Being the state’s industrial hub thousands of vehicles, including multi-axle trucks carrying industrial goods, use this highway on a daily basis. Frequent accidents have been witnessed on this highway which cause loss of money and human lives and its four-laning has been demanded by the industry since long.

Notably, the high cost of land acquisition had acted as a major stumbling block in this project. The National Highways Authority of India had refused to fund the project as the cost of the land was much higher than the cost of the structure which was supposed to be raised to four-lane the road.

The width of the highway was, therefore, reduced to 39 m in Himachal and the state government had borne the balance expenditure of about Rs 15 crore.

A sum of Rs 124 crore were disbursed among the land losers for land acquisition by the authorities in Himachal.